Let me explain.  Raccoons, we presume,  are mischievous creatures: they get into our trash with dextrous little hands; they wear masks; they could be friendly 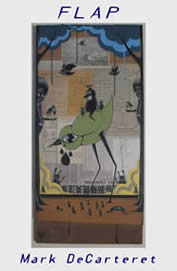 or rabid; we make hats out of them.  Squirrels, on the other hand–though they too are no doubt responsible for domestic mischief, especially for you bird lovers–are, shall we say, less symbolically charged beyond their general mysteriousness as living creatures.

So when my friend and fellow poet Mark DeCarteret, reading from his new book Flap, explained the other night at his book release that the squirrel in the poem he was poised to read was, autobiographically speaking, an injured raccoon his father had put in the trunk of the family car when he was a boy–and when he explained how the original story itself gets buried by the associations the language the poem itself creates–I got it.  I think.  If getting it is the point.

And the point seemed to be about what a poem calls for–this strange conjurer we don’t, perhaps, take dictation from, but, more accurately, tricks us into doing its writing for it–we feel something akin, maybe, to Bukowski’s caged young poet being fed whiskey and hookers while the dirty old man comes off a bit cleaner, healthier.

Bullshit aside, clearly some poems are ABOUT people’s actual life experiences, written in such a way as to accurately evoke said life experiences.  There is plenty of room in the world of literature for these kinds of poems, and I could list many brilliant examples.  However, it is impossible as readers to judge veracity; what we have are words laid out in rows (or we have poemy-like sentences in paragraphs we call prose poems–there has to be a better name for this oxymoronic lack of self-irony).

What I’m trying to say, really, is that Mark DeCarteret is both a close friend and a poet I admire deeply. Trust me, I have other poets I call friends, but none who create the kind of lines that consistently render genuine envy (sorry guys and gals!).  This could be a problem for a friendship, surely, though, in this case, I lack the kind of ambition that would make such envy dangerous.  Let me be clear:  I want to promote my friend’s book, and I’m using this platform to do it.  There is a necessary murk here, though–a desire to raise my friend’s poetry to where I think it belongs in the critical landscape.  Critical landscape? What kind of bullshit-speak is that, you ask?  I, too, have my misgivings about such parlance, and yet these poems, regardless of who had the aplomb to follow their wild perfection, deserve a larger context than promotion.

Tom Lux (Yes, I need some “big gun” support here to buoy my assessment”) has praised DeCarteret’s “splendid ear” and “big wild heart,”  pointing out that these poems are full of “bribes, most of them so good even an honest man couldn’t turn them down.”  To be honest, Mark is paying me to write this blog.  OK, not really, but I’m hoping he takes me out to lunch.

One of my favorites in the book is the poem “Sequel”–a DeCarteret poem through and through.  These poems move so fluidly from image to image, tone to tone.  This is not Coltrane, though, so much as Paul Desmond, one note sliding into the next as if you’d been reminded you were expecting it:  “As of Wednesday the dead/ had not taken to the rewrites,/ slipping in and out of character/ like late April snow–/ their somnolent smiles/ nothing more than a tearing/ away, their worries outdated,/ rigged somehow with wire.

These poems take us again and again, in their recognizable strangeness, to our “rigged” realities, where we inhabit a world occupied not only by the dead, but by our own constant “rewrites,” the streaming “Sequel” of our days–this life pinned between two eternities, infinitely large wings these poems command, with a rare authority, to “Flap.”  I want in on that strange and miraculous flight, especially with a friend.