It’s after a couple sets of tennis. My friend Peter says he believes that Big Foot exists, something about how Jane Goodall thought so too. We’re sitting down 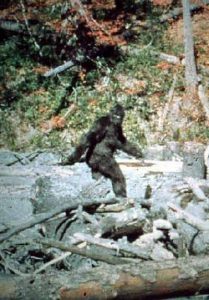 on a bench, and I’m not ready for this. He hates the middle class. That’s his big one. That and physics. How everything is motion and anyone who says otherwise is full of crap. Anyway, the Big Foot thing caught me a little. Something keeps me from asking if he’s ever seen one himself. Instead I ask if Jane Goodall had ever seen one and he says no but that she believed there was enough evidence out there. I pack my bags and stand to walk off the court. “What, you don’t believe in Big Foot?” he says. “I really don’t know Peter,” I say. “I don’t know that kangaroos exist either,” he says. “I’ve never seen one but I believe they exist. That’s what I’m asking.” “I believe they could, O.K.,” I say. “Is that enough?” “Whatever,” he says. We walk toward our cars and I notice that he has a new bumpersticker. It reads: Capitalism Destroys Lives. I nod in its direction. “Good one,” I say. “Better be careful who gets behind you, though. You know with all the gun-totin’ folk ‘round here.” I like to throw out a southern accent now and again. “Screw ‘em,” he says. “Yeah,” I say and get into my own car and drive away. I feel strange. Little zaps fire in my head and I chalk it up to meds and too much exercise. I want to get home and stop thinking about Big Foot and what makes things exist. And then my cell phone rings in my tennis bag. I want to answer just to know I exist but the truck in front of me has one of those Hang Up And Drive bumperstickers and I’m afraid he’ll see me. “He probably has a gun, too,” I think and then I wonder if anyone would shoot Big Foot dead just to prove he exists. It is sad to think this and then I’m home and wondering if my wife will recognize me when I walk in the door. I feel different that way. Perhaps, when something finally kills me, as it one day must, then others will really know I existed? I know there’s a good bumpersticker in here somewhere if only I were clever enough.