Alone in Michael’s car, I steal moments of sleep without meaning to. I try to keep my eyes open, and each time they close I instinctively jerk myself awake. It’s early, a few minutes before seven. My husband thinks I’m at the gym, and in twenty minutes he’ll start to wonder why I’m not back at home getting ready for work.

Michael is inside Kara’s Coffee buying breakfast. This is where we go after we’ve left the quiet safety of his bed, the same thing we’ve been doing for the last eight months. Together we force comfort from this small routine.

I want to distill these final minutes that he and I have together before we start our separate day; I want to slow everything. But then I think of Dylan at home, of how he’ll ask with enthusiasm about the distance and time of a run I didn’t really take. The familiar anxiety wraps itself around my chest and pushes outward, as if my ribcage might snap from the pressure and burst through my skin—like a tree splintered by lightning and then uprooted as it falls. All I want in this moment is to already be back home, brushing my teeth and towel-drying my hair, listening to Dylan call out the newspaper headlines through the bathroom door.

The sun heats through the windshield glass, but it’s not enough to counter the cold edge of this November morning. I watch a blonde woman push a baby stroller down the sidewalk while she talks on her cell phone. She’s wearing a ski hat with a yellow pompom on the top. In one hand she holds a jerking dog leash, though I can’t see the animal from where I’m sitting. The line extends into nothingness—an invisible pulling force, and I let the landscape of the parking lot blur. Far off, someone blasts a car radio, and for an instant I dream of a parade.

Whenever I tell Michael that it’s difficult to answer questions about a future with him, a future without Dylan, he looks anywhere but at my face. While he’s inside the coffee shop, I try not to picture the way he busies his pale eyes with anything else in the room during these conversations, a conversation we had again this morning. He no longer gets angry, or speaks of what’s fair, and this resignation has started to haunt me even when we’re not together—it snakes up from the drain in the bathtub while I’m taking a shower, it hijacks radio waves and crackles through my alarm clock in the darkness of the bedroom each morning. Michael no longer asks me if I’ll leave with him, but the guilt has already woven into my bones; my body is heavy now, I’m tired constantly.

Throughout the day, while we’re apart, I recall moments with Michael from our hurried mornings. Last week: He lies with his head across the top of my bare thighs, his face upturned, smiling. When my phone rings, he sits up and begins to untwist the sheets. While Michael makes the bed, I stand by the dresser and talk to Dylan, my voice low, saying all of the things a happy wife would say to her husband. For a few minutes after I hang up, Michael and I occupy separate spaces in his room, trying to remember the way back to each other.

I always imagined heartbreak as a type of shredding, with the clawed organ left as tangled threads in a pulp. Even now, after all these months, I’m surprised to find that it’s a divide—two perfect halves, symmetrical fruits. One that beats Dylan’s name; the other, Michael’s. But when split evenly, there’s nothing left for me. All that blood just stills.

Michael returns to the car with two lattes and chocolate croissants. He buckles his seatbelt even though the car is in park, even though we’re not going anywhere. We spread napkins across our laps for a breakfast picnic. When he hands me my coffee, he asks, “You okay?” and then he squeezes my hand in his.

I don’t answer, and in the silence that follows, I think again about goodbye. Then I talk just to avoid leaving, to postpone the ache that will make up apart. “It’s too cold today,” I tell him, “It’s not even winter yet.” It’s a silly thing to say, but my voice tangles once it hits the air; it’s quieter than it sounds in my head, and I find myself swallowing anything else that might have been there.

Michael slides the thermostat to red as far as it will go, and a blast of warm air rushes out of the vents. He cups his hands around mine and rubs. He missed a spot along his jaw when he was shaving, and I point it out, kiss him there. I laugh, but the sound is hollow—it tinkles against my teeth and the roof of my mouth as it leaves my throat. I’ve made this decision a dozen times before. I’ve always come back. This will be the last time.

I study the dirty laces of my running shoes, my unpainted fingernails. I press my lips together and turn away from him. He shakes his head when I finally begin to speak, as if he can deflect each sentence as it slips from my mouth. As if this will make it untrue. As if this will make me stay.

There are a hundred apologies. “I can’t,” I say, “my heart breaks over it every day,” and then I’m silent; there’s nothing that will make it hurt less. In the stillness of the car, Michael relaxes his hand so that our fingers are no longer touching. He closes his eyes against my words, and as I reach for the door handle I worry that eventually he’ll stop seeing me at all, my silhouette etched against that darkness. 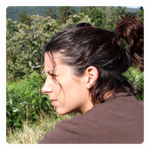 Kirsten Clodfelter is the Associate Editor of Pif Magazine and an MFA fiction candidate at George Mason University. Her work can be read in Perigee, Word Riot, Forge, Dark Sky Magazine, and Bayou Magazine, and is forthcoming in The Iowa Review. She was a finalist for Cutthroat Magazine’s 2008 Rick DeMarinis Short Story Award and The Tampa Review’s 2009 Danahy Fiction Prize. She currently lives in Virginia.