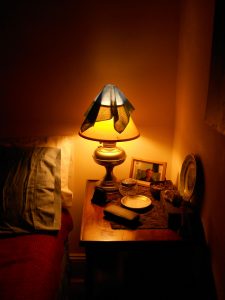 One thinks that one is tracing the outline of the thing’s nature over and over again, and one is merely tracing round the frame through which we look at it.

A presence is always unexpected. However familiar. You don’t see it coming; it moves in sideways.

Scrape those barnacles off me.

Unless you can get beyond yourself, you were never there. 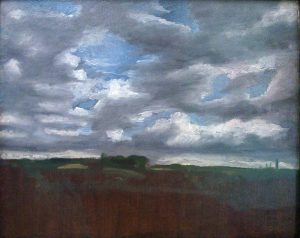 In honor of the ringing among these epigraphs, I lead up to an imaging presence: it is March 1996. After coming to NYU from Columbia University, I am late in my last semester of being a doctoral student who does not teach. I live in graduate housing, just around the corner from Bellevue Hospital. A week earlier, a Korean young man, studying at the Stern School of Business, leapt from the 17th floor while I sat at my desk before the south-facing window, struggling to round off an essay on Virginia Woolf’s approach to landscape and its connections with the painted hills of John Constable, loomed over by sea-like skies. Looking to my left, I saw his body suspended by a shining shelf of air, only to torque into the pounding he became as the ground met him. I have never forgotten either this sight or that sound, and both are with me as I attempt to sleep, much later. In my dream, I am visited by the presence of Susan Barker, a biologist, writer, the mother of my long ago lover, and now dead for some time. The dream’s vantage point is as though a camera were angled from my bedroom ceiling, Susan sitting among the covers at the edge of the bed as I lie on my back, eyes shut. She begins to gesture with both hands, plaiting something that I cannot see, murmuring: they are all there, the words; you must simply pull them out, through your body, and weave a work of them. When I wake, too early, I return to my essay, finishing it with a grace and limpidity new to me.

Now, to some presences vital to my current teaching: I think of Jian Su, a biology major, a senior who has taken and withdrawn from Writing the Essay (a required course) twice before in her college career. A woman from Taiwan, Jian Su’s prose often gleams with lingering focus on what the words of Annie Dillard and Mark Doty perform on the page, along with all that their performances imply regarding larger ideas. When she responds to my commentary on the values of slow attention, Jian Su tells me that no one has ever offered her these observations, so that she cannot yet verify their merit. She stands before me after class, head down, the hair heavy, covering her eyes, though I find one tear slipping out of them. I have learned of her overbearing mother, how Jian Su hears her mother’s scolding voice in her head as she writes, straining to craft a whole essay, greater than the mere addition of its parts. And I think of Alessandro in another class, who vanished for a week, reappearing once I pressed the urgency of reappearance upon him, via email, and after I contacted NYU’s Director of Student Advising to say: this student needs our conjoined attentive skills. I see Alessandro sitting in front of me in the library, in a public space where many other students glance at their books and seem to tilt towards us, responding to the concentration of our talk. Alessandro explains: I have not been able to get out bed because my boyfriend, since I was 13, has left me, and I don’t know how to experience this; also, I can’t talk about it with my mother, who won’t accept my being gay, or with my father, who doesn’t live with us, and who swung the door at my face when I told him about my sexuality.

He asks: how do you survive such losses? 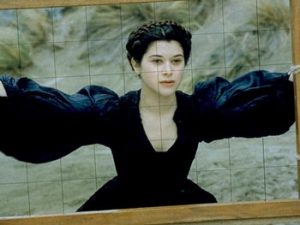 For both students, I remind them of our preceding class as means of reflecting on what, in our work, can help them to envision where they have come from and how they might imagine moving forward. I tell the story of that class: how, before turning to the final half of our film, Artemisia, I draw Wittgenstein’s Duck-Rabbit figure on the board, requesting that students tell me what they see. Some say a duck; some a rabbit; and all assert–in response to my asking, as I point to the chalk-marked board: what is this?–well, it’s a drawing. When I advise them that there is a more precise answer to this question, one whose priority exceeds their reply, they recognize that they have been in contact with chalk lines on a board, shapes that the optics and the neuroscience of sight permit them to acknowledge doubly. And, if doubleness, richness, multiplicity, holds for a simply sketched body, we ought to carry that fruitfulness to the essays we read and write, the film we are about to complete watching, the beings among whom we live. But we can only commit ourselves to that holding to the extent that we waken to how we see, to the ways in which this how and what we attempt to identify may be in conflict–and to the (rightfully) inescapable claim that such conflict is our labor, prodding our efforts to conceptualize, to think through again. Shortly thereafter, we watch as Artemisia Gentileschi learns the art of seeing-in-depth by gazing through a perspectival frame, join her as she applies more than one frame to envisioning embattled bodies, choreographed in space. Later, Alessandro and Jian Su tell me, in different words, that they can rearrange the experience of their predicaments by knowing more closely the frames through which they order that experience, since any frame suggests the world beyond it, a domain large enough to include multiple approaches to what we conjure by means of sight.

Everything I have written about these two students is made room for by the essay-form that many of us teach daily in our classrooms, by the ethics ordering that form, founded on the energy to connect word, idea, pattern, and the tale of the thought that deploys all at the service of what Berger calls, in Bento’s Sketchbook (2011), “bestowing attention” on what requires our cogitating-time (72). And, if the essay we have written or read impresses us with a bestowed intensity, “something of these habits,” Berger tells us, “something of [their] way of giving attention, will become our own,” so that we might “then apply” that gift “to the chaos of ongoing life, in which multitudes of stories are hidden” (72). 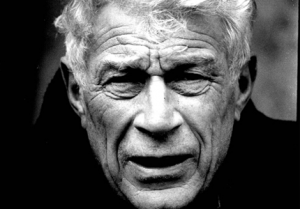 Because of the reciprocity between teaching and learning, because of Jian Su, Alessandro, and their future colleagues, I salute the maintenance of this breed of teaching that reaffirms how, by endeavoring to “get beyond” ourselves, we confirm the “there” we start from–and expand on.

Bruce Bromley is Senior Lecturer in expository writing at NYU, where he won the 2006 Golden Dozen Award for teaching excellence. He has performed his music and poetry at the John Drew Theatre (East Hampton); the Berklee Performance Center (Boston); Shakespeare and Company (Paris); The Village Voice (Paris); and at the Edinburgh Theatre Festival, where the Oxford Theatre Troupe performed his play Sound for Three Voices. His poetry, fiction, and essays have appeared in Out Magazine; Environmental Philosophy; Able Muse Review; Glasschord Magazine; Fogged Clarity; the Journal of Speculative Philosophy; Gargoyle Magazine; Women and Performance; and in State of Nature Magazine, among other journals. Dalkey Archive Press will publish his book Making Figures: Re-imagining Body, Sound, and Image in a World That Is Not for Us in 2013.