Jeremy’s paintings are highly detailed and often take months to complete. He starts with a preliminary painting where composition, color and tone are resolved. Then the painting is drawn up and mapped out using washes of color before painting begins. Once the main painting is completed he applies glazes and altering tones, adding depth to color and texture.

Jeremy is most well known for his paintings of cosmonauts floating in empty landscapes. He is expanding on this theme in his next series of paintings; which will be completed in November 2010 for his second exhibition in Hong Kong.

More from Jeremy Geddes on Fogged Clarity: Cosmonauts
Purchase prints of his work at jeremygeddesart.com 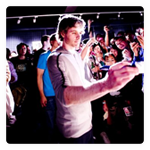 Jeremy Geddes is an artist living and working in Melbourne, Australia. Having studied painting in the early 90s, Jeremy initially worked in video games as an art director. In 2003 he returned to painting full time and has since had his paintings published and exhibited around the world; most recently an exhibition in Hong Kong with Ashley Wood. He has received multiple awards including the Spectrum Gold Award for his comic cover Doomed #4.