Created primarily with India ink and often on found paper, Jon MacNair’s work is brimming with symbolism. His fantastical scenes, strange creatures, and outlandish characters invite immersion and stimulate the imagination. In taking a look at his work, you might find yourself kicking around inside MacNair’s head; When asked to descibe his work in a word, his response was ‘personal.’ While the work is personal to Jon, I see a mutual human element present that most of us can relate to and even become privy to. You can view more art from this prolific creator at jonmacnair.com. To find out more about his process and shows, check out his flickr stream.

In his own words:

Undoubtedly my work is narrative in tone. I like to create scenarios that play out on the paper; vignettes in which the viewer can ponder the origins of and hopefully imbue with their own personal meanings and interpretations. There is a sense of darkness and mysticism that permeates my landscapes and characters. Often I place these characters in a nighttime setting. At night, nothing is what it seems; shapes shift and shadows loom, tricking the eye and making us question what is reality and what is imagined. Revolving heavily around themes of birth, death, fear, love, joy, and the complex relationship of man versus beast, the images I create often reflect the most basic human emotions. 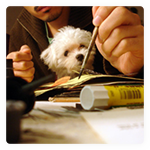 Jon MacNair earned a BFA in illustration at the Maryland Institute College of Art in Baltimore. His illustrations have been featured in editorial publications such as Hyphen Magazine, Pittsburgh City Paper, Baltimore City Paper, Urbanite, Baltimore Magazine, Rockpile and The Riverfront Times. His fine art has been exhibited in Los Angeles, Philadelphia, New York, Portland and San Francisco. He currently lives and works in Michigan.