Laura Veirs’ seventh album July Flame, which Colin Meloy calls “the best album of 2010,” explores the emotion of mid-summer. Drenched in wood smoke, sunlight, pollinators, pastoral dales, fireworks and warm nights, her lyrics explore the dichotomy between one’s desire for permanence and security and the realization that such things rarely exist. 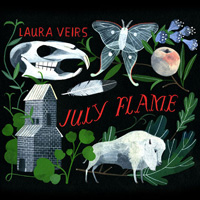 Laura Veirs is a Portland-based songwriter and the founder of Raven Marching Band Records. She has released seven albums, the most recent of which, July Flame, was called “The best album of 2010,” by The Decemberists’ Colin Meloy.