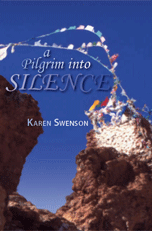 Karen Swenson’s newest title, A Pilgrim into Silence, is divided into four sections. Each of the sections explores the life journey of an urban American woman—a woman of a generation and a class perhaps tinged with theatrical qualities of pomp and circumstance; a lady propelled by notions of religion and reason.

The privileges and joys of such a woman are no less real; her observations, no less driving and unremitting. Nor is her will spared in any way from the stifling rigidity of role expectations. Griefs are sedated and finally deadened with alcohol. The metaphysical places of beauty, desire, and love are dished out with heapings of loss on the long road to self-possession. Early on, love and despair become traveling companions in this collection.

Sonnets and villanelles are employed, and the lives of animals often serve as metaphors.  Sparrows are quarrelsome in spring:

But come a warm June evening, rancor gone,
brown pinstripes smooth, one holds the rail, his soft
throat feathers pulsing song, just as my wrist
beats my blood, in the mindlessness of beauty.

After an operatic evening out on the town, the voice of one of the poems drifts into an instant of third person disembodiment:

At intermission she [a neighbor] leaves in her mink. But
I know the score. While Violetta has
her last ecstatic moments, my ghost, home
alone, holds her pose before her claque of empties.

(“The Phantom at the Opera”)

In an unexpected leap in the section, in a food court somewhere in a more modern Teheran, girls giggle across tables at the close of a sonnet:

. . . even
a Tex-Mex. An isle of adolescent liberty,
where boys stroll by to look at faces that leaven
dreams, creating divine and political difficulty.
The essence of adolescence is invariably heathen
and totally in opposition to religion and reason.

The second section of the collection is composed of poems that take place in or near Mother Teresa’s Home for the Dying Destitute in Calcutta. Ironically, it is not only a home for the hopeless, and those with more privileged, languishing spirits also abide.  In their service, they find life among the death. 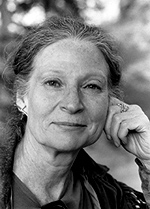 The poems oddly dovetail with the poems in the opening: the themes of need and an abandonment of maternal love; infantile—even animal—survival instincts; again love and despair. But even here there are small gestures of collegial cooperation in a world of almost Darwinesque competition and unrelenting denigrations. It arises between two foreign women volunteers:

In Holland
a psychiatric nurse, here she’s bemused,
as I am by how habit-forming
it is to wash the clothes and patients, their
skin crackled–sun parched, river mud.
We shop, lunch with our fellow foreigners
on meat, not dahl. We move with ease
from the Dead to the Oberoi Hotel
at night watch Rambo videos
or else read Indian philosophy.
Returning in morning air, sour with exhaust,

we find a white wrapped shape . . . The
nurse and I agree, it feels as if we almost
have a life here—a white-wrapped gift from Death.

In another, the will to live is animated:

. . . no, not pity, rather astonished admiration
for the sheer willfulness of life—a blind
and cornered cat slashing at Death’s dogs.

The third section is an account of the poet’s pilgrimage to Mt. Kailash—a holy mountain in the Himalayas. Still the journey of exploring will, sacrifice, and discovery.

Had this book ended with the third section, this reviewer would have set the collection down feeling the book’s promise fulfilled—the arc of a journey of discovery to the edge of self-possession. But the last section—poems returning to the themes of motherhood and urban scenery—made the collection feel less artful and more valedictorial and willed, an unnecessary bringing of things full circle. An outstanding sonnet about an aging mother’s demise, “Driving,” could have served as the sole closing poem for the book:

When she picked up the hitchhiker Death,
that beggar’s first demand was the alms of her eyes,
the cataracts were the blur of his breath,
his exhale shrinking her boundaries without reprise.
He shut her highways, lowered his border bar
till the only way out was on his road, in his car.