I am thinking how we can use what we have
to invent what we need.

When we pause to consider what a tiny fraction of our evolutionary history has been taken up by our post-farming existence, it becomes blindingly obvious that our biological make-up was formed almost entirely before farming. We continued to evolve after this, of course, even though it probably took the form of a kind of self-domestication. There has been an increasing realization in recent years that our technological and cultural achievements of the past 10 thousand years have drawn us out of the orbit to which we had become adapted–a mis-match has arisen between our biology that took millions of years to evolve and our current lifestyles that took only a few thousand years to develop. Throughout human evolution populations that could not handle rapid rate of change in their environment caused by some perturbation went extinct. The Neanderthals are a prime example. Now it is [we ourselves], through culture and technology, who have introduced a perturbation at a pace that our bodies are finding hard to match.

Clive Finlayson: The Humans Who Went Extinct: Why Neanderthals Died out and We Survived (219) (2009).

Importantly, Rich meditates on how it ought to be possible for us to imagine, inversely, the relations between desire and its objects. Our customary world continues to urge us to conceive of a self that aims its longings at things, so that this self is meant to begin with desires, being steeped in desires, only to direct its hunger at the longed for target, which becomes–under such logic–both ingested and identical with the self that eats it. But Rich, as she starts with an implied survey of our resources, with what is (sustainedly) available, imagines that we must find it possible to retool the coilings of our desire in order to fit what can be had, without reference to desolation. Doing so, she offers us a re-envisioned self that can think, critically, about desiring operations.

Wth that imperative in mind, I type out now the rounding off of the introduction to my book, Making Figures: Re-imagining Body, Sound, and Image in a World That Is Not for Us:

I organize my investigation of Woolf’s thinking around The Waves (1931) because the latter arises from the imperative of interrelatedness, the challenges of interrelatedness we stand so in need of, whether or not we recognize them. I also believe that Woolf’s questioning the singularity of selfhood answers for her lifelong interest in generic fluidities, in how one art form touches on another, that touching, with respect to her readers, reshaping the reading mind that commits itself to contemplating liquidity and its troublesomeness. It is not obvious how we can distinguish one thing from another under the press of that onrush, how we can discern things as separate from one another when they appear to merge. Yet merger need not be identical with erasure, just as the thing that touches us, by doing so, cannot be our equivalent. Indeed, this emphasis on the toil of discernment amid the interrelated Woolf embodies, very powerfully, in the manner by which she represents her narrator’s interventions in the narrated.

Though I respect much Woolfian scholarship, awareness of a mobile, narrating presence, with regard to The Waves, has often been strangely eliminated from discussion. Virginia Woolf and the Visible World (2001) shows Emily Dalgarno consistently citing, for instance on page 22, the language of Woolf’s characters as though the words were not reported by the implicit intermediary whom the text takes such care to register; Ann Banfield, in The Phantom Table (2000), declares that the novel’s “structure” alternates “unoccupied perspectives . . . with occupied ones” (309), even as such “perspectives,” with their proliferating figuration, presume a seer; for the whole of Cezanne and Formalism in Bloomsbury (1987), Beverly H. Twitchell refrains from connecting Cezanne’s portraits of objects seen by an advancing eye with Woolf’s transiting narrator; J. Hillis Miller, in Modernism Reconsidered (1983), finds all Woolfian narrators “a fictional replacement of God” (180), an assertion that such presences could only deny, in view of how they intervene between character and reader, never demonstrating complete access to what they describe or that nothing persists outside their activities. No: Woolf’s mediating narrator can be none of these.

The elimination from view I am articulating supports the requirement that we should look again, read again, ascertain the ways in which we intervene in things, how they intervene in what we call ourselves, how the two fields must be interdependent so that both endure. Woolf’s narrator figures a means of meditating on such endurance, but its noting is not merely delivered to us, not rendered transparent for us: we must labor for it, accept that, like the world in which it occurs, envisioning is never finished. Incompleteness can only be its wonder and our problem, so long as we mistake the world for what we demand of it and ourselves for being always on the verge of a completion that is yet another sort of stopping.

In my ensuing materials, I explore how we might look at bodies, at things, at what we do to them, at how we might listen to and image them in new ways, all in the light of Woolf’s exemplary struggles to re-envision what seems so simply to be the case. Yet, since to reimagine the relational is to thwart the linearity implied by mere equivalence and antithesis, since that thwarting points to an understanding of relation in multiplex terms, indirect because not self-evident, the reader will find that the indirection of my approach to what Woolf asks of us is consonant with an indirectness which suggests that our valued concepts need to be investigated once more, challenged once more. A signal gift of indirection lies in the inferences it exacts from us: what we see inferentially can neither be already given nor predetermined, so that the inductive process fundamental to drawing close necessitates our comprehending how we order, how we experience, proximity. Thus, when the reader marks that my Woolfian explorations are surrounded with, interrupted by, deliberations over the work of Oscar Wilde, Plato, Isadora Duncan, William Butler Yeats, Sophocles, Iris Murdoch, Simone Weil, and that of many others, I hope she will concede that what appears to be an interruption, an intrusion, honors the difficulties of Woolf’s re-evaluative thinking by exhibiting that such thinking has a long history, however indirect–one worth our watching over it. And I maintain that to keep watch enjoins our recognition of the reciprocity without end through which the world that is not ours for the having may survive, for keeping watch must be reciprocal–or become a nothing whose making will be ours. 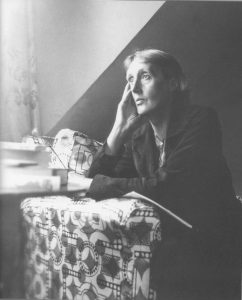 It seems to me, after typing this, after teaching, yesterday, the exploratory essay-form to a group of high school students, that much of our species difficulty with desire issues from the wreck risked, always, by synecdoche. I mean: when, to us, the part appears to replace the whole, when the whole engulfs the part, we make ourselves victims of the yearning figure that proceeds as though it were impossible to retain any cognitive distance between our hankering selfhoods and what we pivot towards, impossible to critique our methods for engaging in action. And this unconceived distance ruins all that is subject to it. My students, yesterday, were perplexed by the claim–in many of our texts–that we can think about desire, that feeling and intellect do not abide in unrelated territories, something that the essay-form, as enacted by Montaigne, for example, shows with a contemplative lucidity.

But each of us can ponder the figures that energize how we act, so that we might become more than what our figures seem to dictate to us, honoring the more of the world we belong to, a reinvention of “need” in which the part will be answered by the ringing resonance of the whole.

Bruce Bromley is Senior Lecturer in expository writing at New York University, where he won the 2006 Golden Dozen Award for teaching excellence. He has taught a the New England Conservatory, the Berklee College of Music, Columbia University, and at NYU. His book, Making Figures: Re-imagining Body, Sound, and Image in a World That Is Not for Us, will be published by the Dalkey Archive Press in 2013.