“Sonically, the music rides an even keel, swooning gracefully between the intimate, close, and minimal, and billowy piles of polyphony; feeling like you had a party and everyone who came brought a voice, a horn, a string, and it all fell together just so. Which, in a way, is what happened.” 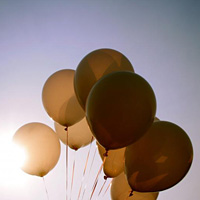 The Red River is an indie folk-rock band composed of eight metaphorical brothers and sisters from Long Beach, CA. Their debut LP, Little Songs About The Big Picture, was released by Brave Records in November.