The Gay 90’s: Old Tyme Art Show featuring the work of Mark Ryden opened on April 29th at Paul Kasmin Gallery in New York City and runs through June 5th. If you’re in NYC, this exhibition is not to be missed. Ryden’s beautiful works framed in immaculate hand carved wood invite a good look and promptly challenge with rich symbolism. Make of it what you will. The images below were taken directly from the exhibition and are courtesy of the artist and Paul Kasmin Gallery.

From the press release:

In his hauntingly beautiful and masterfully executed oil paintings, Ryden creates his own contemporary mythologies whose archetypes include fairy tale creatures, historical figures, and pop cultural icons. Seamlessly juxtaposing macabre motifs like meat grinders and disembodied presidents with eye-pleasing ingénues and seductive landscapes, the artist produces a vision of society in which menace and comfort are inseparably interwoven. These labor-intensive canvasses deftly rework centuries of art history, combining the grandeur of Spanish and Italian religious painting with the decorative richness of Old Master compositions and the lush textures of French Neo-Classicism.

The central theme of The Gay 90s: Old Tyme Art Show references the idealism of the 1890s while addressing the role of kitsch and nostalgia in our current culture. “In the modern era, sentimentality and beauty have been disdained in the art world,” he explains. “This new work is explores the line between attraction and repulsion to kitsch, and between beauty and banality.” Through their visual richness and symbolic complexity, Ryden’s infinitely suggestive dreamscapes invite us to enter their world and to indulge our sense of wonder. 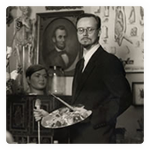 Mark Ryden was born in Medford, Oregon and received his BFA from the Art Center College of Design in Pasedena in 1987. Recent exhibitions include Wondertoonel at the Frye Art Museum in Seattle and the Pasadena Museum of California Art (2004-2005); The Snow Yak at Tomio Koyama Gallery in Japan (2009); Tree Show at Michael Kohn Gallery in Los Angeles (2007); Bunnies and Bees at the Grand Central Art Center in Santa Ana, CA (2002); Amalgamation at the Outre Gallery in Melbourne, Australia (2001); and The Meat Show at the Mendenhall Gallery in Pasadena (1998). He currently lives and works in Los Angeles.