Kalina became an internet phenomenon with his video everyday, which has been viewed over 8 million times, making it one of the most popular videos on the internet. Introduced in the Summer of 2006, the video quickly developed into an art world hit and a pop culture phenomenon. everyday is in the permanent collection at the Austin Museum of Art, has been featured in numerous group shows, and has been widely parodied and imitated. Most recently it was referenced on an episode of The Simpsons. VH1 named Noah #14 on their list of the Top 40 Internet Superstars of all time.

Kalina is no one trick pony, however, and here we offer some of his other provocative work.

Also in this issue: West (Of Here) 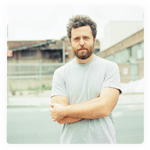 Noah Kalina‘s work has been exhibited at museums and galleries across the world, including The Musée de l’Elysée (Switzerland), The Torrance Art Museum (Los Angeles), Jen Bekman Gallery (New York, Hey Hot Shot ’05), Clamp Art (New York) and Forma (Milan). He lives and works in New York and is a graduate of the School of Visual Arts.