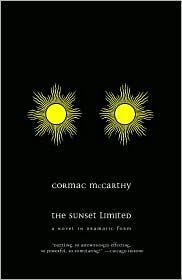 For some of us art is a means of psychological survival. No great revelation, I know. And I also know there are other legitimate, less dramatic, ways of experiencing art. But what I know most intimately are my own encounters with terror and subsequent struggles to articulate them.

My wife and I recently watched HBO’s bold airing of Cormac McCarthy’s The Sunset Limited. Directed by Tommy Lee Jones and written for TV by McCarthy himself, the teleplay stars Jones as “White,” a suicidal Professor of Philosophy, and Samuel L. Jackson as “Black,” a self-professed ex-junky Christian.

When I read the book, which McCarthy calls a novel in dramatic form, a few years back, it was on the heels of David Foster Wallace’s suicide—a combination, as it would turn out, incommensurate with peace of mind. I had been obsessing over the course of a weekend how to tell my students that the author of the inspiring (for some) “Kenyon Commencement Speech 2005” I’d had them read, as part of a semester-long examination of what it means to be “educated,” had hung himself. I had hardly slept since the news, transfixed by certain similarities in DFW’s story and my own—so much so that I had doubled my intake of Klonopin to allow for some necessary grading of student essays.

And yet, as Kafka famously put it, what is the use of reading, anyway, if it doesn’t come like an axe blow to the icy sea inside of us. It was a Sunday, and it was Cormac McCarthy, after all (what could be worse than the moral depravity of Blood Meridian, a book I love more than any other). Besides, I was certainly frozen, locked in a prism of questions without external referents. Inside a diamond nothing shines; the Obsessive Compulsive finds patterns of thought that permit no exit because he fears this enclosure might be his only access to any thing like reality. Let’s just say I survived and leave it at that.

And so when the adaptation aired I was hesitant. I had just read a wonderful book, All Things Shining, by the classicists Hubert Dreyfus and Sean Dorrance Kelly. Inevitably advocating a kind of re-invigoration of Homeric Polytheism that would allow the human psyche to be transformed by forces outside of itself, the book seemed to put together many pieces of the DFW suicide puzzle for me, pieces which had been nagging at the borders of my fragile understanding of my place in the world. So, why would I want to stir things up again? Perhaps, I needed to test the strength of my new-found “revelations?”

The HBO production is well-staged and performed, the setting simple enough to let the words do their dance. Both Jones and Jackson understand the rhythm of the dialogue, letting the poetry surface without any fussing or tinkering with the original text. When the actors do falter, it’s under the weight of their counterpart. It would make sense, for instance, for the defeatist White to be swallowed up by the spiritual zeal of Black, but Jones appears, in fact, at times, to be outside the scene, stunned not by Black, but awed at times by the performance of his fellow actor, Samuel L. Jackson. Jones peaks toward the end when the full onslaught of his dark vision can no longer be contained by the confines of the small one-room apartment that forms the set. Jackson, on the other hand, is unconvincing as the dejected unsuccessful savior. Where the actor seems genuinely silenced by the spiritual decadence unleashed by Jones, the character Black still has several lines to deliver, lines flattened by an obvious disconnect with the emotional reality between the actors (perhaps, a risk of sticking too close to the text?).

The book offers nothing but blank space to absorb this impact; the teleplay offers us a sun rising to a new day outside the apartment’s window. It proves no consolation, I’m afraid. White lives in a temporary limbo as long as he remains in conversation with Black; alone again he faces the void. Or does he? We are left only to know that Black’s faith has been inexorably and irrevocably challenged. At this point, although I’ve enjoyed the lively banter, like the interweaving of two sensitive jazz soloists, of two worldviews, even laughing out loud several times (a rarity for this viewer), I’m glad it’s over. My palms are sweating, and as I look out the floor-to-ceiling windows on dusk from the fishbowl of our studio apartment, I feel the all-too-familiar feeling of unreality that has often preceded a full-blown panic attack (i.e. limbs gone numb or trembling, a roiling stomach, an abject horror in the face of an inability to construct an even temporary scaffolding to support the self in the world, et al.).

And so I rise and walk to the bathroom, knowing dinner will be a gastric impossibility. Looking in the mirror in a futile attempt to ground myself with my own image, I curse the image there for watching the damn show. And yet I am not yet fully possessed by the dread that I, too, will end up like White in a state of despair, where the world is hollowed of all meaning. The thought that his destiny is, in fact, my own floats at a distance—still too close, but nothing a little PRN Xanax won’t keep at a manageable remove. And here’s where it gets interesting, where Kafka’s fallen axe is pried loose again:

See, my wife knows me. She knows I’m suffering on some level. And so she catches my eye when I leave the bathroom. “Why did I watch this?” I ask her. “Am I some kind of masochist?” “Sit down,” she offers. And we talk. “Whom were you routing for?” she asks. “Black or White?” “Black,” I say. She reads my mind; she tells me I won’t end up like White because his version of the world obviously doesn’t suit my psychological needs. She mentions that both characters are transformed by their encounter; I add that the truth, if there is any, is in the tension between them, in their conversation.

Conversation. Conversion. We come to art, those of us who depend on it, to be continually transformed by the encounter. We watch the axe rise above us again and find those to help us receive the blows, our insides crazed with splaying cracks—these jagged stars we gain from impact.