Although our last and least; to whose young love

The vines of France and Milk of Burgundy

Strive to be interest; what can you say to draw

A third more opulent than your sisters? Speak.

Nothing will come of nothing. Speak again.

Unhappy that I am, I cannot heave

My heart into my mouth. I love your Majesty 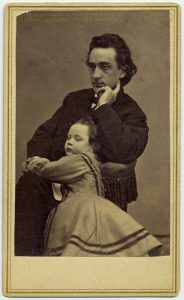 Edwin Booth and his daughter Edwina by Matthew B. Brady, ca. 1864 via George Eastman House Collection

It’s much bloodier than I remember, I said. So, lesson 1:  be more violent. Not a bad experiment, but there had to be more.

The speeches. They’re beautiful, but they seem so abrupt. I could never get away with that. So, lesson 2: more speeches?

As I sat with the play, I found I was again sincerely arrested by the famous moment above, that word: nothing. It comes fewer than one hundred lines into the play, sets almost all the action going. But why does she do it? And how does she say such a thing to her father? Is she stupid? Supremely honest and holier than thou? Goading? Spoiled?

Here was my lesson. Reading plays forces me to think like an actor and a director, to create a whole scene out of situation and dialogue only.

I had never seen Lear performed before, so I watched this excellent (and free) version with Ian  McKellen and Romola Garai. In it, Cordelia is a little spoiled, very incredulous. Her sister Reagan is a lush. It was delightful to watch.

It made me realize how differently each moment could be played, the possibilities inherent in each. I also realized I ought to bring more of my imaginative writerly self to play-reading, and more of my actor self to fiction writing.

P.S. Kurosawa’s Ran is supposed to be an amazing re-imagination of King Lear. Have you seen it?

P.P.S. Edwin Booth was a famous 19th century American actor (and brother of John Wilkes) who played Lear. Don’t he and his daughter look regal?

P. P.P.S. More of my writerly thoughts on reading at A Crack in Everything, carolinecomerford.blogspot.com