A good literary anthology has much in common with the musical playlists we make for our love interests. Every inclusion is a clue to the compilers’ personality and our ambitions for the relationship. What song to start with, where to drop a classic fun song to make the listener smile, where to place the overly obvious love song, or the thoughtful or familiar one, and what song to conclude with— all are vital decisions to a successful mix-tape. As the mix-masters, we feel there is no room for error. Anyone who doubts the importance of such a gift in a relationship probably hasn’t been in love during the last thirty years. 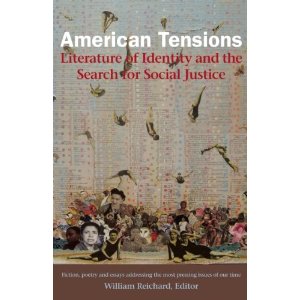 William Reichard’s anthology American Tensions: Literature of Identity and the Search for Social Justice succeeds the same way a perfect playlist does. Although the aims are different, the immediacy and deliberation in this collection reflect the care and attention to minute details that make this book of varying themes and voices a cohesive vision.

“‘The world is a harmony of tensions,’ wrote Heraclites of Ephesus, and he might have been describing one of the primary energies that holds the United States together,” Reichard states in his introduction. The voices that rise are far different from one another. They are individuals attempting to find their places in a family or relationship or the work-place or the community or in adversity or in war or natural disaster or love or apathy. It is apparent, as the anthology continues with its collection of voices, that the larger question is how do these voices with their individual concerns rise to create a singular vision of America?

Reichard wisely begins the anthology with a short story by Louise Erdrich that acts as an invitation to the entire volume. Narrated by a young, pregnant Native American woman, “Future Home of the Living God” takes the reader through various misinterpretations of appearance and cultural and genetic inheritance. The narrator encounters a Vietnamese nurse and notes, “The perfect Minnesota Nice accent is surprising, coming from such an exotic and elegant person.” She later reveals that the name given to her by her adopted “Minneapolis liberal” parents is “Cedar Hawk Songmaker” while her given name from her biological Native American mother is “Mary Potts.” The incongruity between interior and exterior spaces and assumptions of the characters in the story mark the tension in America that Reichard names as the object of this anthology.

Some of the writers featured in this collection are familiar and widely anthologized. On a train ride, a stranger leaned over and asked, “Have you read Dorothy Allison’s Bastard Out of Carolina before?” as I was reading its excerpt. I hadn’t, and he insisted I read the full novel. He flipped through the anthology’s index: Jonis Agee, Nickole Brown, Alison Hawthorne Deming, B.H. Fairchild, Nick Flynn, Eric Gansworth, Yusef Yomunyakaa, Ed Bok Lee, Kristin Naca, Adrienne Rich, Scott Russell Sanders, Patricia Smith, and Brian Turner, among many others. The new and fresh writers are exciting and Reichard allows them to coexist and flow from one to the other and from their more famous contemporaries with sensitive placement. What rises from the thicket of voices is a search for belonging that sometimes ends in questions with no resolution, and which sometimes rhyme with another’s search deeper in the volume. From Bobbie Ann Mason’s vision of a disintegrating marriage in “Shiloh” to Ray Gonzalez’s Proustian meditation in “Praise the Tortilla, Praise Menudo, Praise Chorizo” to D.A. Powell’s environmental and personal “cancer inside a little sea”– so many of the writers vocalize very particular concerns about themselves or characters or experiences and thoughts, and the point of these differences and tension is that together they reveal a larger image of the American experience.

American Tensions in some ways reminds me of Dylan Thomas’ Under Milk Wood. Thomas’ play is a dizzying collage of people in a small Welsh town that ends up, through the inhabitants’ gossip and dreams and memories, telling the solid story of their village. Reichard has collected many unique speakers, logically placing them in specific sections with loose themes of family and class and environment, and allows them to jump and fade and blend into one another. The conclusion is far different than Thomas’, of course, reflecting the reality that America does not have a static identity. The identity of its people is always fluctuating and changing, searching for peace and justice. It is messy. It is a cacophonous chorus that somehow exists together, and through fluidity, change, and difference rises in breath and tone and creates a varying, strange, unique, and startlingly beautiful chord.

As a playlist captures the complex and sometimes competing forces within a relationship, revealing much about the essential interplay between composer and audience, so too does American Tensions provide a timely snapshot of our nation’s post-identity literary landscape and the real uses and purposes we make out of writing and reading.

Sam Woodworth is a writer and musician living in Minneapolis, Minnesota. With the band Woodworkings, he recently toured the Midwest, Toronto, and the Northeastern United States.
Loading Comments...