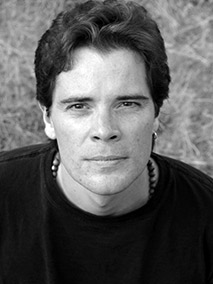 Christopher Patton’s third book, Curious Masonry, includes three translations of Anglo-Saxon poems from The Exeter Book, and “Hearth,” a work which he calls a “palimpsest,” mostly made up of erasures from his translation of “The Earthwalker,” using both the translation and the original text. The Exeter Book is an anthology of Anglo-Saxon poetry from the tenth century– a book so undervalued in days when Latin poetry was seen as higher than vernacular that the ring-stains on the original manuscript pages reveal that it was used, for part of its history, as a place to rest beer mugs. There is something appealing to our culture about the dark times of Medieval Northern Europe, as lovers of Lord of the Rings or Ingmar Bergman’s The Seventh Seal will attest, and those who come in search of some mead-hall existentialism will find the poems that Patton translates to be very satisfying.

A translation of an ancient text is an act of both scholarship and poetry. So is it best left up to scholars or poets? Scholars’ translations are often loyal to the text and context, but frequently make for clumsy poetry. For all their accuracy to literal meaning, they tend to fail in recreating any kind of visceral immediacy. Translations by poets can often stray far from the original, resulting in work that feels more like a creative project of their own than a faithful rendering of the text. These can often result in exhilarating poetic experiments, but are hardly helpful for getting a sense of the original text. Both of these have their merits, but clearly the best bet for a reader looking to discover a work in a language they can’t read is to find that rare middle ground—a scholar gifted with a poet’s ear and sense of line (Richmond Lattimore in his translation of The Iliad, for instance), or a poet with a scholar’s interest in faithful rendering, such as John Ciardi’s rendering of The Divine Comedy.

In his three “traditional” translations, Patton finds that balance. His approach to translation can best be described as poetic pragmatism. Lyricism is clearly given a high importance, as we can see in these lines from “The Earthwalker:”

Then the friendless one awakens,
sees the fallow waves before him,
seabirds splaying feathers, bathing
as snow falls, shot through with hail,
the heart’s wounds are heavier now,
raw with a longing for loved ones
long departed.

But he never sacrifices clarity or readability. He wisely turns the separated, double two-stress line of Anglo-Saxon poetry into a standard iambic tetrameter, which he handles with maturity. The meter is strong but subtle, and resists the primary danger of tetrameter: that it is the meter of most of the common nursery rhymes and can sound like it. He uses a comma to recreate the caesurae of the original whenever possible, and utilizes alliteration (the single most recognizable device in Anglo-Saxon poetry), but in both cases only does so when it does not distract from having clear, accurate, and readable lines. In his tone, I think he has achieved something similar to Lattimore’s translations of Greek, which is a unique ability to create a voice that manages to sound epic and dignified like the original without sounding archaic or stilted.

Most importantly, though, Patton’s translations leave the pathos intact. The poems, as one might expect, are bleak and sad:

And at times strikingly religious:

A fool does not dread the Lord, when
death comes to him he is unready;
blesséd is he who lives in humility,
mercy comes to him from heaven.

As a result, these translations make us feel that these speakers are us. They remove the distance and the condescension with which we would be inclined to look on a work from the Middle Ages.

One should note Patton’s artistic integrity for including “Hearth,” the fourth and final poem in the collection. A book with only the “traditional” translations that make up the first three sections — which I think have the potential to become the definitive modern translations of these poems — would attract a far wider audience than it would with the fourth and final section. A work of bilingual erasures liberally peppered with asterisks, “Hearth” will find appreciation in a much smaller and more specialized audience, most of whom will be poets themselves. However, the concept in this last poem is quite sound, and clearly grew organically out of the considerations that went into the first three translations. One who works with manuscripts from the Middle Ages, such as Patton has, knows that oxidation, time, and poor care of books created erasures long before poets like Jen Bervin made it into a literary technique. Furthermore, working with manuscripts that came before standardization of spelling or spacing must have caused Patton to question our own rigid typology, and the homogenous sterilization of our language. And if you read “Hearth” aloud (though not in a public place where you might be thought insane) you will find a careful and very musical attention to rhythm within the deconstructed language of the piece. “Hearth” unites Curious Masonry into a work that both provides three welcome modern translations and explores the nature of translation itself– a work that renews poetry from an ancestor to our own language, while at the same time exploring contemporary poetic and translation practices.