Or Consequence is the sixth collection of poems from Cynthia Hogue. Hogue is informed not only by experience and history, but also by theory and academic discourse. Hogue is a poet drawn to the cerebral and the abstract. That is NOT to say that Hogue is not masterful with images or is a didactic poet; nor does she deny the hunger for communion that sex can only briefly assuage. Okay, the linguistic terrain is a bit tricky. But fortunately, she is a poet of extreme precision and no histrionics.

In Or Consequence, there are Études (short studies) on love, power, karma, listening, trust and memory. The poetics ply less the trade of deep image and are more interested in pushing the envelope of ontological thought. Traditionally listed as a part of the major branch of philosophy known as metaphysics, ontology deals with questions concerning what entities exist or can be said to exist, and how such entities can be grouped or related within a hierarchy. Hogue — with other poets who share this interest — has a penchant for the words language, mind, desire, and memory.

Or Consequence is divided into three sections. The first cuts to the chase in establishing the means will be philosophical – but the subject will be love. The pursuit itself will have something to do with the measure of change:

…without a clear
aim in mind in

fact the mind feeling not clear
as if at the bottom of a lily-
pond, not the blue and
white nénuphars Monet painted going blind

but the mucky bottom with long green stems
in nubilous, light-flecked water.
Do we all go through
this floating from time

to time when the self cannot see
the self so close in its need
to control, which is the urge
to have nothing

When Hogue uses an image, it is clear and pointed. She is painfully aware of the universal charges firing helter-skelter in the world. She often uses enjambment as a creative device to keep the poems from settling:
<

…Of course
there’s no recourse with large
bodies of
righteousness on the horizon,
giant tomatoes tall as houses.
Once alone
we can see the ripe though dust-covered
disagreements rolling across the desert
about to quash everything-

the sun, mountains, world
disappearing beneath them.
Who can say no to such mayhem?

And in “Étude (On Power)” one can picture any structure of power: the walls of the “ivory tower,” the masculine world, the demands of a language:

and hear, I will decide what’s best for you
(one I , many you’s)/
This I’s behind walls, bricked-up. Looking out.

if I say nothing 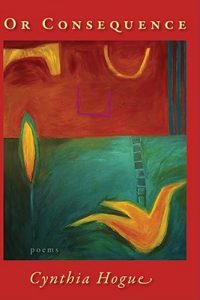 “New Orleans Suite,” the second section of Or Consequence, comprises three poems based on historical events. Themes of unmarked possibility and erasure seem to be marked on the white spaces of the pages themselves. A historical figure pursues legal liberty, insists through, and vanishes. An era and a place channel the dreams of the values of the Enlightenment into America and is almost lost. A city endures levels of erasure. Moral, historical, firm, poetic ground is established; and as quickly gives way. Hogue is a poet who understands that dialectics both sharpen and blind us. She evokes the notion of “being there” and quickly follows with that of “not being there.” Meanwhile, she never ceases to ask “Why is this here? And, what does it mean? “New Orleans Suite” is both a minute and vast range for the imagination.

France plays a role in many of the poems. In many ways, it is an emblematic place of poetic struggle for universal virtues: Liberté, égalité, fraternité. It is a place of poetic dignity. A place of poetic pilgrimage. A source that once “dreamt of” and then “opted for” change; and, as such, becomes an expression of consequences.

The third section continues explorations of linguistic and ontological domains. The poems in this third section continue to explore personal and historical consequences — and change. There is a poem for a “Green Card” beloved. In a poem taking place on a walk through the Loire Valley, the speaker is suspended between a glance back and a glance forward:

Gold filigree wears off the markers of my fingers trace.
The names on the wall and the flat courtyard stones,
the graves on which I walk. I draw close
the shawl of rain, the hand catching mine cold so
cold I turn.

Even not having the language of the place keeps Hogue in existential suspension. But the certitudes of life are much like the castle and war sites one visits, “to which all come but none stay.” Trust and hope may seem like little to ease some; but in Hogue’s pantheon of virtues, they are – they must be — enough to sustain her on her travels. The conveyance of real intimacy is in their balance:

your silken
voice rustling the curtains of

your eyes closing and you now
unmoving. Looking out.
I thought to say, Come out of it, come
to your senses, where

are you come back?
Your true colors—
that azure (as you’re)—bleeding
through was hard

to miss. But let’s talk for the moment about
how to convey that sense
(you’d almost forgotten) is no stranger
than touching.