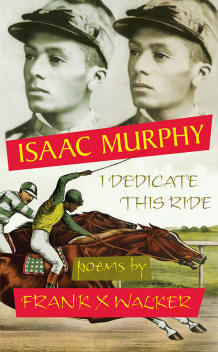 Frank X. Walker is a native of Danville, Kentucky. Isaac Murphy, I Dedicate This Ride is his 5th collection of poems. In two of those earlier books (Buffalo Dance and When Winter Come), Walker traces the journey of York, the African American slave and body servant of William Clark, through a series of poetic monologues in the voice of York. It is a poetic device of ventriloquism employed to fill a gap left in the accounting of the historical Lewis and Clark Expedition.

Born in 1861, Murphy was the son of a slave. Within his next 35 years, he rose to the top of thoroughbred racing in a career that brought him international acclaim. He won an unprecedented 44% of the races he entered and was the first jockey to win the Kentucky Derby three times: 1884, 1890, and 1891. Part of the lore surrounding Murphy’s racing legacy was his penchant for not using a whip.

When folks find out I’m him
they always want to know what I say to ‘em.

…I rub my hands against they neck
lean into they ear, pretend I’m the wind an whisper
“Find yo purpose. Find yo purpose” and hold on.

The poems follow Murphy’s rise to glory. His youth in Lexington, Kentucky, his time spent with horses and his training at the tracks, his encounters with racial violence in the post-Civil War South, his destiny and burial at the early age of thirty-five.

Unlike Walker’s earlier books embodying York, Murphy’s saga is not shared in a single voice. Early in the collection, Walker gives Murphy’s mother and father voice. His father, who does not return from his service in the War Between the States, has two songs early in the narrative. The givens and the stakes are very clear:

In Kentucky, it was no short row
to volunteer up for the Union
even with the promise of bounty.

The first violence we met
was at the hands of hostile white farmers
and not their angry Gray army.

… When they passed the law
freein’ wives an children of enlisted men,
escapin’ the yoke was so desirable

even hard-ankled colored women
up and married soldiers,
just to get some of that freedom for themselves.

(“For Family and Country”)

Throughout, there are also songs in the voice of American Burns, Murphy’s mother:

My son walk the straight line I drawed,
but a good mirror for daughters
was E. Belle Mitchell from Danville….

There be no derbies for colored women.
But if Miss Mitchell was a horse, I’d stand
in line all day just to watch her eat grass.

Eli Jordan, Murphy’s trainer, appears. As does Lucy Murphy, Murphy’s devoted wife. Lucy’s destiny has its own ups and down; even beyond death. Murphy died in 1896 of pneumonia. He was originally buried in the African Cemetery in Lexington, Kentucky. His remains were later relocated to the Kentucky Horse Park. Lucy Murphy’s body was left behind; today, her burial site is unknown.

The poems not only trace Murphy’s rise to becoming America’s most famous jockey, but they also trace a more complex relationship with racial injustices and discriminations—with “the sting of race and sport.” Bitterness is sublimated and injustice and anger are never very far away in the poems.

They call me mechanical, stoic and all business
at the track, but riding a horse fast is easy
compared to my toughest job—holding rein
over the large, angry, bitter colored man
that lives inside.

Those energies are offset by other moments of affection and happinesses based in the things that money cannot buy. There is one charming moment when Murphy tells how Lucy can dress up and behave just like a fancy lady, “like any daughter or wife of money:”

invisible to many in the room,
cakewalk with them across the floor
without even leaving her seat—

sending them back to the kitchen singing
Mrs. Isaac Murphy is one of us.

And in a jubilation of self-possession, Murphy proclaims:

…a good trainer or jockey could make
enough money to buy and race his own horses.

Now some say that’s rich. But Granddaddy Murphy
taught me any man who owns himself is rich.