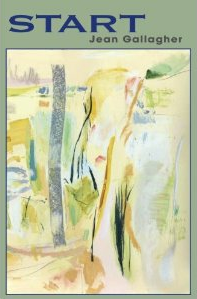 Jean Gallagher has given us This Minute (Poets Out Loud Prize, 2004) and Stubborn (Field Poetry Prize, 2005). Her third collection turns to the mystery-shrouded chthonic rites of Demeter at Eleusis—specifically to the Homeric Hymn to Demeter. According to the Homeric Hymn to Demeter, after her daughter Persephone is abducted by Hades, Demeter goes to the Greek city of Eleusis and eventually asks the citizens to build a temple for her where she will teach them her Mysteries, religious rites that offer initiates a happier existence on earth and in the afterlife.

The book is carefully divided into groupings. Gallagher’s postmodern re-inventions are sparse, acute, and haunting. Each word is potently selected, each line break an exercise in cautery. One does not live on the seeds of a pomegranate alone. There is also perhaps the flesh of the sacrificed pig. Here is a complete poem:

THE LESSER MYSTERIES (I)

Even if you’ve killed something
you love there is a way
in. You can still be taken
apart by hunger. You can
still have your pieces
put in a stone box and shaken.
You can still be put back
together to feel the scorch of things coming
to be as they are.

One of the sections is based on the Scripts on Gold Leaf, a set of tablets that contained instructions for negotiating the passage into the afterlife, including instructions for how to address Persephone and other chthonic guardians.

Even now, after the shine
on my ideas shook off in tinsel, I still
want things… When I got to the water,
they said and you are…? I said I’ve been
leaning against this white-hot cypress,
reaching, all my life.

Whether a photographer capturing the moment of a leap, a stubborn disciple giving over to the process of a living faith, or the place where Zen and the hymn of the pagan mystery cult of Demeter collapse into one another, Gallagher’s is a pure voice after what is both mysteriously ineffable and self-evident in the moment. It is all about—the start!

Scott Hightower is the author of three books. This fall, Self-Evident, his fourth collection stateside, was recently released by Barrow Street Press. Early next year, Oases/Hontanares, a bi-lingual book, is forthcoming from Devenir, Madrid. Hightower teaches as adjunct faculty at NYU and Drew University. A native of central Texas, he lives in Manhattan and sojourns in Spain.
Loading Comments...