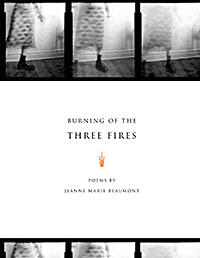 Burning of the Three Fires is Jeanne Marie Beaumont’s third book. The overriding characteristic of Beaumont’s poems is their exuberant exploration of poetic possibilities; i.e., variation. Beaumont is interested in the modal possibilities of poetry, she is no dabbler. Her interest is smart, abiding – and, ultimately for the reader, rewarding.

All poets have an abiding interest in language as being the medium in which poetry exists. But, for some, that investigation can become an overarching — even reductive — interest. Language can combine with grammatic, rhetorical, and metaphysical possibilities in a far more nuanced modal expression. Beaumont consistently expresses a playful, clear, and abiding interest in poetic modality, and she does so with an air of inclusiveness. Her poems are joyous and smart play. There is nothing confining about Beaumont’s voice, her vision, or her poetry.

Burning of the Three Fires is divided into three sections: “Trinket,” “Alteration of Girl,” and “Rites.” Birdbaths, flowers, oranges, dolls, postcards, and trinkets gleam in the opening section; the imaginative fire of innocent mysticism burns across trinketry:

Plink, plink, plink onto the tabletop (imitative?)
Does any thing fit?
Appearing as from a magician’s trick cabinet—

a three-car train to ring the rink of the rail set
third-rate stones that blink from an anklet
(clink of junk jewelry, e.g., a trinity of bracelets?)

And here’s a thin pen with three tones of ink—try it.

(“In Pursuit of the Original Trinket”)

In “Alteration of Girl,” the second of the fires, the poems are grounded more in domestic perseverance and self-control – and in one sad case, self-denial: 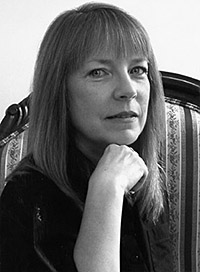 Same damaged goods
the source of Schadenfreude.
Shocking. Her show of shards.
What a lot to shoulder.
Shut the shutters, shadow lady,
shut the shouting out
(ah, but not the shame)
the stab of an age-old jeer
that seems to call your name—
Cheap shoes! Cheap shoes!

And in “Rites” the fire in the poems radiates from mortality. Sometimes the mortality is metaphorical, as a cut flower:

Soon, soon you will bend
and perform your Salome act,

unloosening your rainbow of veils.

… Oh tulips, you make grand company.
Who will throw you out at the end,
pick up your petals like severed tongues
from the shelf, dab the golden pollen
that was your final excretion?

And at other times it is entirely human and unveiled:

It’s not hard to imagine a body
rocked on a stretcher, hearing fading out,
because he’s long practiced, to imagine
the self all gone, or everything else.

(“As If Nothing Happened”)

Beaumont may possibly be the bright side of Anne Sexton or Sylvia Plath. But she is certainly the well-adjusted niece of May Swenson, Marianne Moore, and William Matthews; the playmate of Catherine Bowman, Deborah Bogen, David Trinidad, Amy Gerstler, and Mary Ruefle. Reading Beaumont, one concludes that there is a principle by which a good poem is its own exhilaration.

*Burning of the Three Fires can be purchased here.