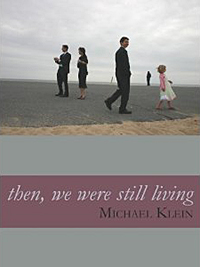 Michael Klein’s new book, “then, we were still living” (2010), is a second collection of poems. Klein’s first appeared in 1993. (Between the two books of poetry, were two memoirs.) The two collections of poetry span the American landscape across surviving A.I.D.S. to surviving in the decade after the crashes into the World Trade Center on September 11th.

Klein’s “then, we were still living” is appealingly simple in surface; cleverly complex in relief. Altogether, the poems create a persona of romantic hysteria. That is not offered as a pejorative. Romantic hysteria, as in — had Peter Tchaikovsky been inclined to understatement about his most fundamental fears and joys:

My mother used to go. In hers.
The light in the room
down with the sun in the cloudy glass of water
or gone the other way: hesitant burn
on her sheets (still in bed) in the afternoons.

The reader is left to wonder about the “hesitant burn;” perhaps a slow cigarette fallen on sheets, the moistness of fever, the ineffable oxidizing of blood in the veins.

There’s always just a little
blood on the towel, the sheet, the yoga mat – proof
that something broke and I thrived at the edge.

The sight of it: a drop – not a collective.
Its function life – not that I died.
Its clarity:

The stance of the poems is consistent: the innocent love of a son – and brother – grieving in the light of romantic fantastications for real ruins in the physical world. The straight Wally Cleaver family gives way to the misanthropic abandonment of a father; a mother (after two marriages) sunk in isolation and a depressive stupor; and a twin brother’s death in midlife.

Klein’s protagonist neither floats in amniotic fluid nor familial security. While searching for a new place to be in, he has an ear or an eye for body music:

(“Looking for the body music”) 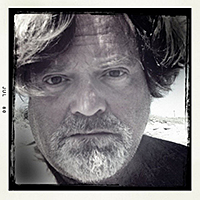 Dr. Frankenstein kept his new life from slipping around a spiral
threading science and then darkening down into the village.
And rising from the middle
of those wavy white bolts he cooked up – rising from those electric

cords that passed back and forth like early television in the air
of his wavy life-after-death lab – rising from the final shock it took
to make the monster black and white – was ancient love.

Love made the air visible – made it
so those bolts didn’t escape the poles that made them current.
And burn up the place.

“Ancient love” burns underneath all the poems in this collection. Even a poem about war ends far from nationalism, far from the mannered ruin of hate and nihilism:

Men having nothing but what they have in front of them and
have nothing.

Some people are in love with those men and the enemy.

Double valences return as music; they steep the listener:

Or just before: the American parades clashing down two avenues
when Charles Ives would stand somewhere in the middle so
he could listen to two different kinds of music steep into the same
sky because they were both his life.

(“Was America ever the world”)

Klein is never coarse; even when bawdy, he is subtle, self-deprecating – and loving. Klein dares us. And for the few minutes we are his reader, we are fortunate that he is in our world; fortunate that, for a few minutes, he is our twin.