One unique aspect of a gay sensibility is that of valuing things for their intrinsic presence or style rather than their assigned “socially invested” value; ie, if the pin sparkles and swirls, it may still be fabulous — even it appears to be gold and diamond and is only made with pot metal and paste. Long after the 1950’s gay men still snapped up pink and yellow pottery vases in the shapes of swans and pyramid-shaded glass lamps in the forms of sleek black panthers. A gay performing artist can create a costume out of just about anything . . . and be fabulous! It is an ever-shifting sensibility: many style-sensitive gay men appreciate what they see, the illusion / while also appreciating what they know is there. There is a connection to play and — like other socially pressured groups — survival by and admiration for a resilient attitude is also in the mix.

Michael Montlack’s “Cool Limbo” is a first book. The list of titles invites: “Liz Taylor in Levittown,” “Baby-sitting on Mescaline,” “My Sister the Drag Queen,” “Venus Doesn’t Glitter When She Stands Next to You,” “Uncle Mame,” “Nobody’s Glamorous All the Time,” “Lilith: Pre-PreNups.”

What Montlack keeps at bay in his poetry are snide voyeuristic irony, prurient gestures, and vain exaltations. There are poems about sisters, friends, and Long Island neighbors who all seem to be at home in rentals in neighborhoods where they can’t afford to buy. There is lots of forgiveness in the texture of Montlack’s poems. Sisters may wear too much makeup or over tease their hair when completing the look they have deemed for their outfits; but, what makes other people wince, Montlack fluidly allows in nature. Almost all of the poems in this collection are written from the point of view of the spectator. They also tend to be written with a “Used to be / Now” differential. Once upon a time the poet was a tender boy, a youngest, sensing his way along; eventually his fluid familial fitting has to find a firmer role, a firmer “place of being” as a “gay” man. The book is a little like what one might have, had young Cavafy come of age living in a house with protective sisters, in modern suburbia.

Or me—…
We’d sit on the living room’s gold velvet sofas
and practice rolling my rrrrrrrs
while upstairs Tamika added more tears to her jeans,
rearranged the six silver studs lining her left ear,
powdered away her olive complexion.
Come on, Michael, she’d call before reaching the bottom step.
Let’s bolt—in no rush but always desperate to leave 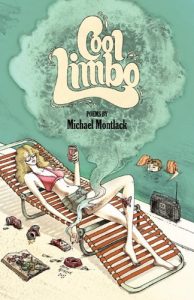 Before one can have a desperation to leave, they have to have a sense of being somewhere; and perhaps an awkwardness with staying, perhaps a place where sisters’ makeup gives way to Halloween Indian war paint. In “boy witch,” the poem’s speaker sees a young neighbor with brothers who is caught — like him -– in shifting gender expectations:

but at seven there was no more
fabric to let out—and maybe
too little charm left in her [his mother’s] eyes.
what a miserable cowboy you made.
an Indian would have been excuse
to paint your face again.

But the speaker sees around him what building without a foundation can come to. If he is to emerge from his own shell, who will he become? Where will he find shelter for his imagination? Places give way to other places. In one poem, the speaker helps a friend move—to the perfect place:

In the poems places give way to other places: Levittown, Long Island, San Francisco, Manhattan. In one passage neighboring parents telephone to report they have assigned their eldest straight son’s ashes and are traveling home:

Her voice not fucken foul,
just bare
like the shore where he was strewn
or his apartment
packed up.

Especially compared
to her own spotless house.

The speaker’s hungers and senses of urgency are gentler than many of those around him. He sees clearly that things give way to other things. There is a deep and abiding sense that real estate and rentals can give way to personal possession. Elusive glamour can give way to lucid grammar. The poems evolve as the speaker of the poems comes out of his shell.

No
more willingness to be trained,
the young man forgoes dinners
for midnight sugar rushes.
His taking always balanced
with some resistance,
his own quiet sentence:

Indulgence is my craving.
As if to say Look. Look.
I can almost see who I am.

The two fixed stakes in his pantheon are his sexual identity and his admiration of a protecting female principle. (Montlack is also the editor of My Divas: 65 Gay Men on the Women Who Inspire Them, 2009).
Much like the Hummus Sexual in one of his poems:

He loves cock and balls
but is certain god is a woman.

The cool fluidity of “Cool Limbo” gives way to Michael Montlack’s clear flash of being.