The Dirt Riddles, Michael Walsh’s first book of poems, has taken several awards. But it is interesting, and to the credit of Walsh’s talent, that the awards were not in contests reserved solely for first books. 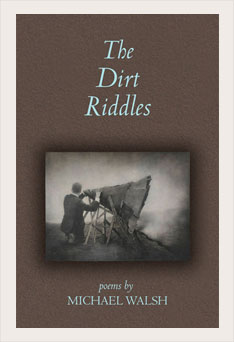 The Dirt Riddles begins simply enough: a youth coming-of-age on a dairy farm. The family business is one of tending to animals and plants. First loves are great loves: mother, landscape (per the attention of the wonder of a youth), father, grandmother, radio, river, and green. One quickly filters in a quick wash of iodine, the smell of manure, the permeating smell of living and deteriorating, cow, and the hermetically sealed sexuality of childhood. Walsh takes his time and is deliberate in his tone and pacing.

The poems have clear titles. They seldom are longer than a single page. They are neat: extremely well lined blank verse, sometimes in single columns, but frequently broken into symmetrical stanzas. Walsh is attentive to music. He edits to effective, restrained, sensual triggers. Prosodically, while not fussy, Walsh is accomplished. His comfort zone is in the aesthetics of a clear, contained column.

Emotionally, the poems rise in intensity and effect throughout the book.

There are four sections. The first two are pastoral, but not cartoon. This may be vernacular flyover life, but real people inhabit the poems; and they have a son who does his part in feeding, milking, de-horning:

These flatlands float murky as negatives.
So much hasn’t been exposed: sun

… ditch blooms swarm the open road.
Frogs hop the gravel where a car drove by,

their eyes wide and itching in the dust.

Degrees of exposure and hermetic seals play their place in the subtle tensions of the poems. What Walsh coins as “anti-pastoral” energies:

“Like a good beast / I jerk hard on the chain” (“Evening Milkings”).

Those energies become more acute in sections three and four.

In “Quilt Rags” the grandmother practices her sacred geometry in disassembling “feathery” fringed old blue jeans. The tension in the language escalates to the poems arresting final simile as she:

down to spare parts, squares
and triangles for her quick pins.
The awkward crotch she cuts last,
pulls out the zipper like a gizzard.

One fine poem, “Camouflage” is ostensibly about a boy leaving his glasses behind as he hops into a community shower. Again pressure escalates quickly in the balance of exposure and the hermetics of a sealed self:

…the other boys
soap themselves in the spray

until the light inside
their skin is shining.

Steam blurs them strange
as X-rays of angels…

Then someone
bumps my hidden body.

One touch and we startle
scarlet, hair frightened

In “Paper Flesh,” another poem, a young father saves a stack of seared comic books from a house fire:

He couldn’t leave these stacks behind.
But the bright covers were already half-cooked,
dark as negatives, heroes and villains
singed indistinguishable.
He never read them again. I do
not for the stories so much as the scorch marks,
the faint pictures of that boy.

In “Pinup,” a boy and girl flip through a fashion magazine. The boy projects himself, at first as one of the female centerfolds in the photograph, and then

… I got comfortable
on the page, male again,
and watched his shaking
hand undo each
cold, steel button.

In “Tornado Junk” the plural pronoun spells intimate bonding in a surveying of debris. A bottle of beer “capped, upright, drinkable” is offered to a companion. In a reflection of somebody else’s eye, “the bright tunnel slowly turning.”

Junk fuses into other rusty junk. “You can’t tell fallen branch from axle, / barbed wire from the vine that burns / like a fuse through the tangle.” Deflated inner tubes stick like leeches to the dirt. The poet says of “a black flower” that he doesn’t know if “it belongs or invades.”

In the jumble of aphids and rust

serial numbers breed with beetles
and seeds, bond to topsoil, my skin.

Another minute and they hive.
Another hour and they empire.

One doesn’t stay hermetically sealed; eventually the world invades, leeches, and permeates.  Eventually, in the tumult, if lucky — in whatever the landscape, whatever the garb — one may find that they belong.