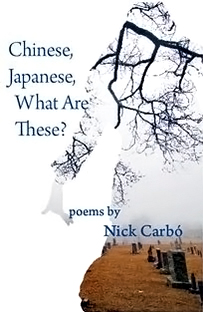 In a scene in the 1982 Ridley Scott movie, Blade Runner, Rachel, the lovely android replicant, corrects her human suitor Rick Deckard, “I am not in the business; I am the business.” Nick Carbó is a tricky author. His work is not about hybrid; it is hybrid. That is not meant in anyway as a condescending diminution of Carbó’s English poetic force. To the contrary, Carbó’s poetic energies are radiant and fierce.

Chinese, Japanese, What Are These? is Carbó’s fourth collection. The previous three books are attractive and built around three very different valences – but all reference the Filipino–American experience. In his new book, there is a continuity that runs its own gauntlet from native insight, colonial enrichment, colonial degradation, to popular culture and high art. There are fundamental effects of shifts in language, food, religion, sexuality, finances: survival. As if walking cemetery stones: To the colonizer, all of the colonized look the same, Chinese, Japanese, what are these? But for Carbó, the cultural landscape is not only a concrete and abstract mosaic, it is also highly personal, as he was adopted by a prosperous Spanish speaking family.

To help the reader deal with such a vast range in terracing, Carbó’s new book is divided into three sections. In the opening poem of the book Carbó segues from a reverie of Yoko Ono in her Central Park West condo giving away Halloween candy to a reverie of the poet’s mother declining from sterling silver dinner parties to Alzheimer’s disease. The poems move on to war torn Europe, where a granddaughter shreds the pages of her grandmother’s manuscripts to make soft bedding for the fat white chickens in the back yard. Things are layered on top of other things. Things sink away and are lost. A winding staircase in Orvieto refuses to remember Hannibal’s victorious army marching on Rome. A French woman is Joan of Arc; but she is sporting a Ferragamo handbag instead of a sword.

In the second section, even the poetics get slippery. Poems are deliberately flat and faux didactic. Some of the poems read like fairy-tales or ethnic myths. One poem in the section, “Why the Rainbow is Bent Over,” pits Rainbow (who is having a clandestine affair with the Wife of Wind) against Wind and Lightning:

. . . When the lightning arrived in the house
of the wind, the wind said, “My wife can’t bring out
refreshments because she is not here. Have you seen
her anywhere?” The lightning responded, “My friend,
I have to tell you I saw your wife entwined
with the rainbow on the summit of tarsier mountain.”
There was a sudden gust out the door and the wind found
his wife with her lips pursed blowing
warm air over the rainbow’s red penis.
The wind worked himself up into a rage
and he picked up a mahogany tree and slammed
it on the blue back of the rainbow.

Another poem in the section, “Why Some Filipinos Have Flat Noses,” makes its revelation:

. . . The brown
and yellow people were smaller

and they lagged behind in the race.
When they got to the ship,
the only noses left were the ones

in the bottom of the pile
which were flattened
and a little misshapen.

That’s why some
Filipinos have
flat noses.

There are also poems about dogs, and one about scrap meat at a French butcher shop. In another, Carbó tilts full force:

1: We mongrels believe these truths to be self-evident:
a. All dogs are created equal under the stare of the Great
Breeder. b. We lick our testicles because we can. 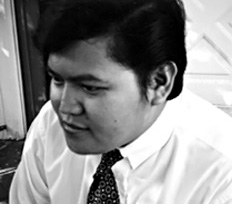 In section three, there is a lovely poem about the death of the poet’s father near the French trail taken by pilgrims to the Spanish shrine of Santiago Compostela, and another arresting poem about the love affair of Rainer Maria Rilke and Lou Andreas-Salomé. The Rilke poem magically ends on Rilke’s epitaph: “Rose, oh reiner Widerspruch” (“Rose, oh pure contradiction.”).

Nick Carbó has been a galvanizing presence in the Filipino-American community, and his fourth book is a direct continuation of that record.