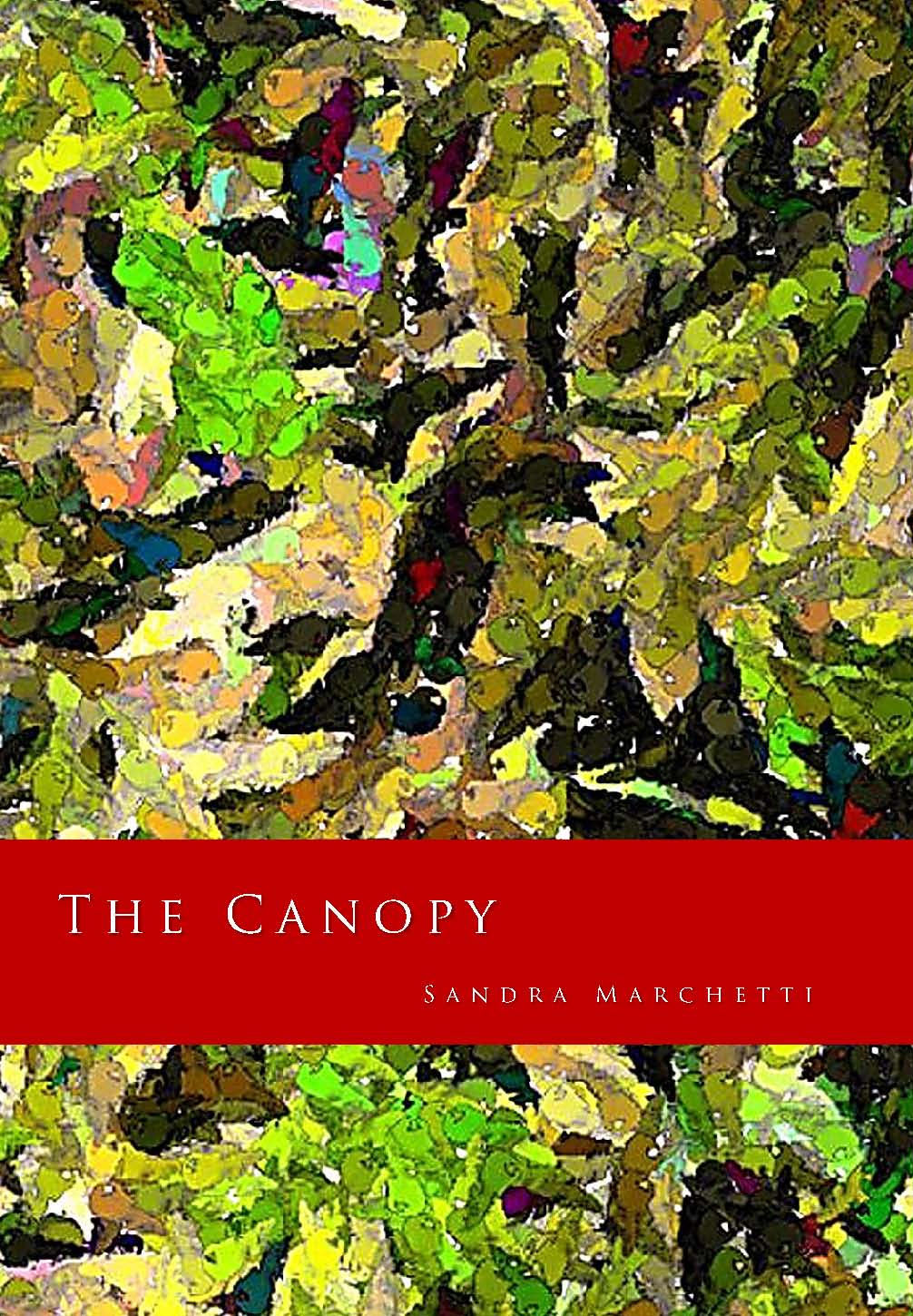 The Canopy by Sandra Marchetti

Sandra Marchetti’s The Canopy, which she’s divided into four succinct and effortlessly readable sections, opens with the heavy-hitter “Pastoral.” This poem sets the tone of her debut chapbook and serves as a smart meta-interpretation of Marchetti’s approach to the poetry that spans these 27 pages and, more significantly, the writing process she’s used to craft it. I crunch my boots in for respite, she writes, survey the scape where the year’s poems were written….

Marchetti approaches language cleverly and playfully in her work. Here, the word scape calls to mind both landscape and escape, and the author at once inhabits the role of surveyor and the role of someone seeking a way out. She artfully holds the balance between these two overlapping personas, between her ownership of and power over her environment and the way she must work to avoid succumbing to it.

Marchetti is able to use her temporary moments of captivity to transition the reader seamlessly into the wild terrain of her imagination, where she can always find freedom. In this space, Marchetti views even the most seemingly insignificant details around her through a microscopic lens, blowing up these tiny actions or images or thoughts until we’re shifted beyond them into the metaphysical, into a fresh space where she is in charge.

For a moment, readers may feel anxious as Marchetti recounts in “Pastoral,” I stand wrung-up, by feet/ fixed in their mush-spots; cold’s tight arrow/ plunges my chest. But then there is a turn, a device we see employed successfully again and again in Marchetti’s tight, controlled writing, a moment when, by the next line, she has reclaimed her power with her exacting language, writing, This is why I go out,/ I think; it is something to recover from.

In owning her experiences with the world she encounters, Marchetti guides readers through the unique and magical vision of her surroundings. With her, we see A snow machine’s/ owl-lit eyes, the falling snow as skirts of white swaying/ earthward. Over and over Marchetti surprises us with the astounding and arresting beauty she finds in her quiet day-to-day movements, in actions as simple and ordinary as going for a walk, eating an apple, or taking a bath with her husband.

Marchetti transforms these tiny details into something grand, something truly lovely for the reader to behold and perhaps to see again, for the first time, from this new perspective. In “Cold dark deep and absolutely clear,” we imagine with Marchetti that June is a sliver/ of wet movement, an arc that asks for colors/ to ice it hotly and shake the shake of gray. In “Silver,” we witness Marchetti in bed with her lover, her skin a new bird/ white in the morning-bright/ and newly downy, but even as she discovers herself bound to these moments of inexperience, her language is articulated with force and confidence. Marchetti easily convinces us that she’s someone who knows what she’s talking about, that she’s someone we should listen to.

Marchetti’s word play continues in the second section of this collection, where she draws the reader in with the musical ease of her language in the powerful “Le Parc des Suicides.” This poem exemplifies Marchetti’s finest balance between the human struggle of maintaining some type of control over our environment and the danger of being consumed by it.

The piece opens with the image of heron and a bridge used for suicide. In the first three stanzas, we see the jumper among the birds, first chasing the heron and then even becoming like the heron with a human’s perch; finally, the narrator transforms and is gifted with momentary flight at the instant of jumping. This action is met (here, again, in a carefully constructed turn) with the aftermath of that fall, the body, no longer heron-like at all, now given to granite,/ carved into a willing water, and later, [f]leshed/ against the sidewalls/ of underwater blood canyons. By the end, what’s physically left of this poem’s narrator has cycled into sustenance for the birds, this is the heron’s/ pick-ground. For those few minutes before the jump, there is a last moment of intentionality, of ownership. After the jump, the narrator has succumbed to their environment, seeking the ultimate escape. The struggle is ever-present, and Marchetti captures it expertly.

Even indoors, in a place as quiet and safe as the bedroom, Marchetti writes compellingly about how truly complex our interactions with our own territory can be. In “Fissures” she explains, My body… / lies on the bed in its bones/ and curls of hair, and here we see the author at her most vulnerable, struggling to shift the balance of power back into her own favor, to find control, even as she tells us, I lay and am unhitched,/ unrolled. Yet at the close of the book, we see Marchetti as the thoughtful victor, someone who is unafraid of what she still has to learn from the details around her as she moves toward self-assuredness, someone who, a step at a time, is claiming her place, someone we need to pay attention to. Everywhere is sharp edges/ even outside rooms, Marchetti writes, I am attempting to see. We should look with her.