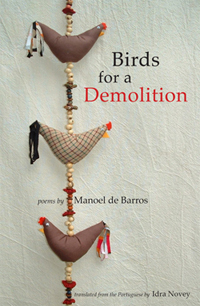 Birds for a Demolition is a compilation of poems by the celebrated poet Manoel de Barros. Life on the rural Pantanal (the beautiful, tropical wetlands of Brazil, in the northeastern corner of the country, near Paraguay) lies as the center of this poet’s expression. The Pantanal is a unique landscape in that 80% of the 54,000 square miles are submerged during the rainy season. Little in the environment is considered stable, practical, or predictable. It is a sustaining, yet surreal and decadent eco-system. The physical landscape gives rise to a poetic portrait.

While Manoel de Barros’s country is Brazil, his language is Portuguese. He is the author of more than twenty collections. He has received Brazil’s highest awards for poetry multiple times: the Premio Jabuti (the “Tortoise Prize”) in both 1990 and 2002, the Nestle Poetry Prize in 1997 and 2006, and the Ministry of Culture’s Cecilia Meireles Prize in 1998.

The poems in Birds for a Demolition are bold, buoyant, and incandescent. Slugs crawl about, naked and damp. Rivers, flowers, piranhas, and birds traverse shadows and stones. The image systems never wander far from the wondrousness wealth of poverty and solitude.:

Meanderer in my swamp,
I arrive at a thicket of birds.
A man who studied ants and tended to rocks
told me in THE LAST KNOWN RESIDENCE;
only bother with the futile.

His language was a depository for twisted shadows,
verses covered with ivy and rusted gutters.

(from “Thrush in Darkness”)

The innocent wonder of childhood traverses the landscape with poetic possibilities. It, ironically, is the same landscape abandoned for lack of economic opportunities by millions of migrants to Brazil’s cities. What arises is a foolish and wise intimacy, a poetic deliriousness:

Dirtinesses recolor me.
I repose in the water’s composure.
It’s in the mummy position I place myself.
I won’t use theater props.
My fight isn’t for facades.
The sky’s design unfixes me.
The hyacinth’s vigor is my festoon.
Day’s end increases my unease.
At times I undergo defoliations.

Like a friar, I’m going to undie of stones.

Idra Novey’s translation of these late modern poems are skilled and arresting. Translation is in itself a finely balanced art. The gifted translator ever looks simultaneously in two directions: back at the source language and forward to the language of the translation. Manoel de Barros’s talent is in good hands with Idra Novey.

Idra Novey is the author of Exit, Civilian, chosen by Patricia Smith for this year’s National Poetry Series (University of Georgia Press, 2012). Novey’s first book of poems The Next Country received the Kinereth Gensler Award from Alice James Books and was included in Virginia Quarterly Review’s list of Best Poetry Books of 2008. She’s received awards from the Poetry Society of America, the National Endowment for the Arts, Poets & Writers Magazine and the PEN Translation Fund. She is currently Director of Literary Translation at Columbia (LTAC) in the School of the Arts.