What has been included in this issue is a set from a long work entitled “Self-Portrait of James Sanders”. The long work was “written” with my friend and fellow member of the Atlanta Poets Group, Zac Denton.  The composition procedure was roughly as follows (with some anomalies noted below): if Zac and I were both present at a Wednesday night Atlanta Poets Group meeting we sat wearing headphones and listened to a recording. As we listened, we improvised simultaneously and our improvisation was recorded. Each week the recording of our improvisation was transcribed by me and by a commercially available speech-to-text software program called Dragon Naturally Speaking. The text produced by this parallel transcription was then turned into a sound recording using Verbose, a free text-to-speech software program. This recording was then combined with the original recording of the improvisation, and the combination recording was what was played through the headphones during our next week’s improvisation. We did ten of these improvisation installments over the course of about nine months. Of course, the recording that served as the first improvisation’s cue was not done this way. Instead, it was composed from external sources, one of which was an excerpt from Lyn Hejinian’s The Person. In addition, one of the ten improvisation installments was done by me alone in front of an English class at Georgia Tech (Zac had to work that morning); another one was improvised by Zac and I at the Eyedrum Gallery in Atlanta as part of the Atlanta Poets Group’s Language Harm reading series. The textual material generated from the human and machine transcriptions is the basis of the text here. The only edits made were the occasional removal of an article or pronoun.

Self-Portrait of James Sanders is dedicated to Steve Benson, whose improvisational work (particularly his iterative improvisations with tape) were a big influence on the piece. 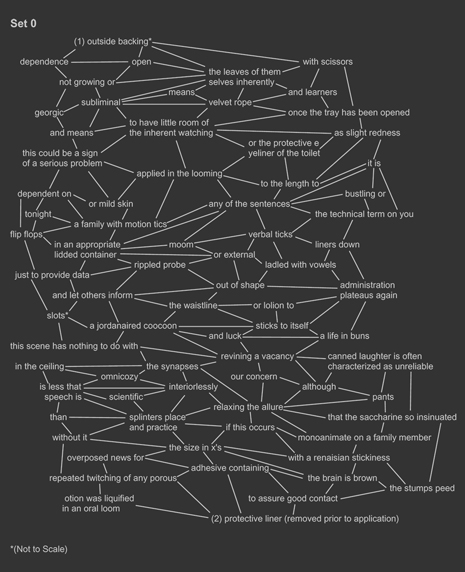 James Sanders is a member of the Atlanta Poets Group. His collection of poems Goodbye Public and Private is forthcoming from BlazeVox.
Loading Comments...