I came to Arctic Monkeys late–probably because so many critics were telling me I would love them. Witty, caustic, frenetic British post-punk alterna-pop–what’s not to love? I couldn’t imagine, however, what would separate them from their counterparts–from Bloc Party, or Babyshambles, or The Kaiser Chiefs, or Foals, for instance?  Simply put, what these bands all have in common, in contrast to Arctic Monkeys, is the lack of Alex Turner.  This is not, of course, 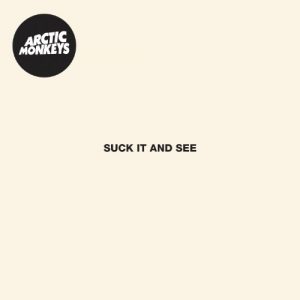 to take away from the rest of the band, but some voices were made for rock-n-roll, and, among males, Turner’s only rival is Britt Daniel of Spoon.

But I want to start with the name of the band, itself, before we get to musical aesthetics and the particulars of the album in question.  What would an Arctic Monkey look like, anyway?  More hair, obviously–and yet, is it us humans who are the Arctic Monkeys, the only primates to travel willingly to such climes?  And what does this make us?  Adventurous seekers?  Stupid mammals?  I’m undecided. Which brings us back to the album in question.

Suck it and See is, in many ways, an obvious continuation of Humbug, an album which slipped under most critic’s radar but remains my favorite of the band’s four.  Humbug, more than anything else, showed me just how much can happen within the confines of a three minute pop songs; I will even hazard a comparison to classical lieder, a la Hugo Wolf (an even denser writer than Schubert) with guitar hooks. The band has the musical acumen to sound as if they are “scoring” Turner’s unceasingly clever (I too hate the word, but it’s appropriate here and meant in the best possible way) lyrics, which are delivered with the kind of timing you expect from a much more seasoned singer.

Some fans will no doubt fault the new album for its lack of punch.  One hears more Smiths here than Buzzcocks, for sure; and yet this is still the band who originally created such a stir with their rhythmic punk-like assaults and playful touches of 70’s psychedelia…

NEWS FLASH:  This album is a *&^%in’ gobstopper supreme.  Yes, I’m sucking it right now, and I’m beginning to see different colors form on my tongue.

OK, so what yesterday I thought was a lazier attention to song craft than on Humbug is sounding more like a softer, looser bed for a more relaxed lyrical swoon–I’m thinking of a heterosexual Truman Capote reclined on a divan with just the right concoction of martinis and vitriol.  Add to that a male adolescent attachment to sexual angst and you get lines like “That’s not a skirt, girl,/ that’s a sawed off shot gun/ And I can only hope/ you’ve got it aimed at me.”  Or the even more burnished masochistic cliche: “Be cruel to me/ cause I’m a fool for you.”

This band is custom made for suckers of all stripes.  Why not see if you’re one of them?