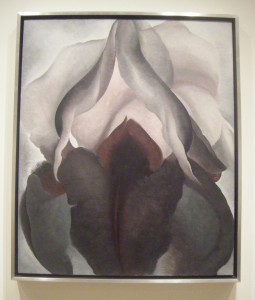 For a complicated range of reasons, a very attractive female friend was recently queried by another female friend in my presence if she wasn’t in fact gay. The simple answer came back, “No, I like cock.”
I got to thinking about that remark later and it occurred to me that I never would’ve responded to such a question with, “No, I like pussy.” I would’ve said, “I like women.”

It’s not that I don’t use the word “pussy,” I do quite a bit. Whenever I can! I just wouldn’t have thought to use it in that context. Synecdoche and metonymy are always clues to deeper psychic values.

By chance, the next night I went to see a performance of The Vagina Monologues. When Eve Ensler first introduced this hybrid dramatic piece back in 1996, I remember finding it witty, fresh, entertainingly transgressive and highly engaging. I thought the content went far beyond the endless mantra of “vagina” and some feminist re-colonization / reclamation of body and psychological integration of self, to address much larger issues such as place in the world…safety…health…and even happiness.

Seeing the “play” again, I couldn’t help but note that not only was my reaction very different this round, the same was apparently true for a lot of the women in the audience.

The first time I saw this work in New York, there was loud and boisterous connection with the material. Very similar in San Francisco about five years later. The performance I just witnessed lacked none of the verve or quality of delivery as the earlier performances—it just didn’t get over the same way. Not at all.

In part you can say that some of the shock value of the original show has worn off. Many other much more radical works have appeared since. There are many fine female (and male) stand up comedians who have worked this terrain hard. But somehow, that’s not the intuitive vibe I was getting, and being an inveterate amateur market researcher (I can’t help myself, I ask people questions), I went up and chatted with people after the show to get their take. Here’s what I feel is a fair summary of what I found out.

1-Not surprisingly, there were very few men there on their own (as I was) just because they’re interested in theater. Every one of them I spoke to was there because they’d been “encouraged” by a girlfriend or female partner. 2-The people who most enjoyed the show were women who hadn’t seen it before. 3-Of the women who had seen it before or had heard about it in some detail, there was a sense of disappointment.

When I heard the word “disappointment,” which is both such a basic and also such a telling word, I realized that this was my reaction too. So, I probed further. Having worked in theater and professional entertainment and knowing a good performance when I see it, I was confident no fault could be laid on those mounting the show—if there was a problem, it lay with the script and the inner concept of the piece. This was the consensus view of the women I spoke to, too.

I’d like to tell you I found out some profound insight, some choice comment that brought everything into focus, but life and interesting questions are rarely like that. So, I’m going to speculate.

I think we’re all frankly tired of gender debates. I think feminism and political correctness—and therefore the flipside of intentional outrage (which is how the original performance achieved notoriety) has wearied everyone of adult age. We get that women have vaginas and men have penises. The long suppressed public exposure of this fundamental fact of all our being has now well and truly been leaked to the press. We get it.

Thinking people, whether they have a vagina or a penis are today also a little less willing to accept “the plight of women” argument without qualification and analysis, when women make 72% of all purchasing decisions in the Western world, receive as much as 75% of all healthcare funding, and demographically make up far less than the statistically predictable numbers of the prison, homeless and mental illness populations. (The mental health aspect is particularly noteworthy given the level of prescription psychoactive medication women in America consume. Care to guess the percentage?)

We lament and indeed curse the fashion industry and the food industry for the eating and body image disorders of teenage girls. We say very little about the outright suicides of teenage boys. And violence? For all the talk of violence against women, of the 17 dead in my original neighborhood in my last two years of high school (all homicide victims), all of them were male and younger than 25. The pattern continues to this day.

This isn’t at all to say that women still don’t face many problems of equality, respect, protection and validation—in American society at least. One has only to look at the current GOP platform of “reforms” regarding women’s right to see how remarkably fraught the situation remains.

But what I think is a pronounced turn at street level, is a growing sense that we are a species—and a species is defined by the two sexes, not divided by them. I’m hopeful that The Vagina Monologues and bestseller fodder like Men are from Mars, Women are from Venus will dwindle into history and begin to seem more and more like the relics of psycho-archaeology that they are.

They had their place. They had their time and their influence. But so did Alvin Toffler’s multimillion selling Future Shock, which said:

“Even now we should be training cadres of young people for life in submarine communities.”

The fact is we are actually finding it hard to train young people today for life in suburban communities.
But lest anyone think I’m making fun of Mr. Toffler, I highly recommend re-reading this massively successful book of the recent past. It opened doors, it opened thinking. For that it should be praised. Still. Many of its ideas remain provocative and visionary. The same goes to the works that have highlighted gender issues.

But life goes on—fortunately. I happen to have a penis. You may have a vagina. We need to move the conversation forward. It may be that we’re all here because people in the past actually dealt with this seemingly daunting issue more effectively than our liberal mindedness can fathom. Perhaps we have crises enough to at last come together. As my father used to say, “Everyone’s equal around the campfire…especially if it’s really cold.”