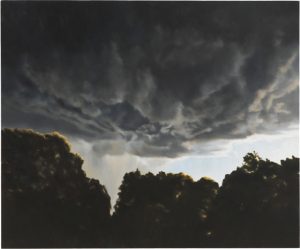 What might it mean to be drawn into meanings that, in some profound and necessary sense, shatter us?
Christian Wiman: My Bright Abyss (2013)

The problem remained that Andreas–a name my father preferred to any smaller sound, one he always ordered his single son to use–was so rarely there that the determination to pursue him might be answered by nothing except its own abrupt, kindling charge. Even so, sufficiently removed from the grass that continued to support me, I saw how the long dilemma of my father’s scarcity gave out a range of possible solutions.

Leaning against the front door, both feet on the slate walkway that bordered the wide rectangle of the lawn, I spotted one of them in the form of a trail whose contours I started to trace around the cherry tree, strangely de-petalled by the thicket of storms that had burred village and sky together, all this May. I accompanied it up, over the rock garden, while it seemed to slow in the willow’s stooping green; I noticed its golden rippling; I thought I could smell the ghosts of my father’s cigarettes and hair cream, as though the ripples were exhaling. Unaware if the ghostly were capable of exhalation, I resumed following the trail into the backyard, through the screen door, past the denim shirt I imagined to be growing, somehow, out of the stone floor beneath it. I discovered myself in the bedroom that my mother had left to Andreas a year ago, when I overheard her saying that she was going to live with another director who would give her face the exposure it deserves–and will repay. Because I did not know how to seek for her, I obeyed the obligation to accept her loss. Standing over the bed, undone, finding the trail’s stuff collected in my hands, a near yarn of hair that my father’s head declined to go on threading, I understood how you can hunt after a man in need of reassembly and still not spy him, summoned, on the other side of that effort.

I wondered what it would mean to carry on trying.

It meant, this struggle over time to amass indications of my father’s presence, not that Andreas should be restored to perfect wholeness by virtue of their gift but that he had been there at all, memorialized by a son adept at gathering the tokens of him together. I arranged them in little heaps in places where Andreas would be sure to see them–on his pillow, on the shut toilet lid in his bathroom, on the computer in the study. I came to understand that these repeated accumulations assumed an Andreas who would lose a button, for instance, along with the boy who committed himself to returning it to him, exchanges which could only confirm the two identities engaged in them. This was before the imperative that seemed to descend on me, requiring me to hold tight even to those remnants of Andreas that others would call impalpable.

I stood in the driveway, just after Andreas and a butter-colored woman had propelled the red convertible into it. They vanished behind the study door. I was listening to the engine’s heat as it pushed into air with a prolonged keen, my right hand straining over the hood to concentrate its upsurge, cupped inside my palm. But the front door thumped, and Anna, the woman with whom Andreas intended to replace a mother gone elsewhere, at least in terms of meals and housework, was maintaining that you could not keep what must always disappear. While she spoke, I knew that the car’s heat, having poked through skin, was moving in a wave up my arm; I identified Andreas as its source; I knew that its intensity would be mine, for the brief time that my flesh might contain it. Perhaps that was what they were for, the buttery-haired woman lying with Andreas on the study’s sofa, or the Anna who sometimes swayed underneath Andreas in her room off the kitchen: meant to stoke a fire of blood and bone until it vaporized into breath, which you cannot keep. Anna went on talking about dinner, about bedtime. I felt myself watching the memory of a late-night moment in which Andreas, hesitating in the doorway, a grooved V between his eyes, looked hard at the son he took to be in bed, asleep. I memorized that look.

Through the distance between us, it taught me that the father did not know what the son was for.

Two years later, Anna informed me, according to Andreas and his instructions, that I might visit the Long Island City studio, if my attendance verged on the invisible. From the first of those visits, I recognized how you can speak well of distances, since the sighted see, the unsighted move, because of them. The crew busied themselves in setting up a shot in which a woman with cropped, almost jagged hair was staked among hurling flames. They popped; they hissed, yet she made no sound. Her scorching was meant to multiply the sales of ice cream throughout the country, I later learned, as if the sudden cut to a creamy squall, frozen in some cardboard tub, could release her from the leaping yellow, douse her. But she would not be put out.

She would go on flaming.

From where I waited, among shadows at the rear of the sound stage, I was about to sense something wheeze and slide as it shouldered a weight that it did not choose to carry. What I will soon know to call a dolly had the camera and its operator on top of it, the whole angled diagonally towards the woman who remained on fire, stopping short of the flames themselves, leaving a space that would equal the length of Andreas, if he could be laid on air and hover 5 feet off the ground. Stepping in closer, pausing just below the cameraman’s back, I watched the monitor, whose image focused on the woman’s head, on her pupils, inside which burning jumped and bobbed, the gap between camera and woman flattened out, rubbed out, wiped away, though that interval allowed this picture to be born and to lie about its birth. Beyond the monitor, opposite the cameraman, Andreas detached himself from scolding the woman to hold her face so that the light could leap across it: he was staring at the boy who had come too near and above whom a klieg-lamp fizzed, warning me to re-angle the direction of my eyes.

Afterwards, many years afterwards, it will seem that I saw the figure of a man whose hair retreated quickly from the sternness of the face beneath it. But, in that moment, the baking gulf between father and son guided me to see that I would burn.

And the burning must mean that you were found.

Bruce Bromley’s fiction was nominated for a 2013 Pushcart Prize. He is Senior Lecturer in expository writing at New York University, where he won the 2006 Golden Dozen Award for teaching excellence. His poetry, fiction, and essays have appeared in Gargoyle Magazine; Able Muse Review; Out Magazine; Environmental Philosophy; State of Nature Magazine; Journal of Speculative Philosophy; The Nervous Breakdown, where he is a contributor, and elsewhere. His book, Making Figures: Re-imagining Body, Sound, and Image in a World That Is Not for Us, is forthcoming from Dalkey Archive Press.