Marilyn Monroe red wigs into the Breakfast at
Tiffany’s party, tilts her hips, moistens her ruby lips. I down
my whiskey, pull her aside.
“What do you think you’re doing? A body,
especially one like yours, is a given.”
“Well then, I guess this affair is over.”
“Don’t waste your charms on me. We’re twins, you
and I. If the body’s the worm, wit is the hook.”
“Then let’s go catch us mister fish.”

O Marilyn.
You never did a disaster flick, did you?
Four times a bright white light pulsed until we were
blinded. Then the tsunamis came.
The first two we tried to get to a boat and when they came
with 500 foot waves, we held on. I held the necklaces
around my neck : a dream catcher on a cord, a miniature
golden lasso tied to another cord, and a squirrel
or woodchuck or chipmunk charm on a third.
The last flash.
From high windows we watched pieces of highway fall
and the streets below became canals.
We were taken to a tree house high on a mountain
and I was reunited with Michael. Under the shadow of the
Enterprise space shuttle, Rachel Nelson turned to us and
said:
“The difference between American and Canadian
poetry is the difference between beginning a poem with
“the boat” or “the sails”.

I enter a greenhouse, recognize the space from that
scene—in her life? in a movie? Rows of cacti planted
outside, a large red poinsettia in bloom.
“Oh—this is where Marilyn—”
The gardener smiles. I walk into the garden, make
my way to two dirt beds where herbs grow.
“—and here is where she laid down.”
The grass path a checkerboard, the small lawn
squares squish under my feet. I return to the greenhouse
and turn to see the garden covered in snow and where I
walked—footprints—a semi-circle toe, a spiked heel dot.
Pan to my feet—high in heels. Pan to the greenhouse
glass—my reflection, hers.

Allen Ginsberg sits on a crate outside the Hotel Chelsea.
He’s dressed in a fedora and cape, flanked by a beautiful
boy who calls him Uncle Oscar, who calls him my Wilde
boy. Ginsberg throws a pair of dice on the sidewalk at the
feet of passersby that catch his eye. He rolls them at mine. I
think “snake eyes” and call “snake eyes” and the dice land
“snake eyes.” He takes a step back and eyes me.
“Have we met before?”
I coo, “When did you roll your last snake eyes?”
“Welcome home.”

Tovah was a man.
He was also a dog.
He was not Maf.
He looked like Ginsberg.
Tovah towed my ’98 chevy cavalier off my parents’
front lawn when I was inside getting supplies to fix a light.
I ran after him caught up with him as he snaked my
neighborhood streets like a demented ice cream truck.
He unhitched my car.
As I waited, I asked him how many he collected a
day.
“302, 382. My family is at a camp, but I will see
them on the 18th and then…”
We drove back to my parents’ house.
On a narrow street we stopped and a cat approached
us with a worm in its mouth. I told the cat he had skipped a
step, that the bird eats the worm and the cat eats the bird.
The body of a yellow and orange and red bird lay on a
stone by a path and Tovah crushed it with his paw.
At the end of the path a door to a house.
I opened the door.
A bell started to ring.
A dog barked.
Tovah and I ran back to the cab of his truck but I
saw his body crumple and thought he was dead. I packed
up his truck and when I went to retrieve his body he had
moved under a car made of aluminum and tin cans that I
kicked apart so I could retrieve him. A squirrel had built
that car, a labyrinth on the inside.
Tovah was alive.

Michael and I are on a bus with Vani somewhere in Nova
Scotia. I’ve written a play starring bears and Michael
chooses words, weighs words, and I say:
“You think it’s awful, don’t do.”
“The dialogue in particular.”
“Stop the bus! Stop the bus!” Vani interrupts.
And the bus driver says, “Ma’am, we can’t stop the bus for
every naked man having a yard sale.”

Marilyn assumes the mantle of grandmother. I bring
her forward in time so we can meet and search for a camera
to take our picture.
She says, “You were named after number
problems.”
We watch a crab filet a rainbow-hued fish in a black
basin of water. It’s my rusted red wagon where I made
terrariums for salamanders in my parents’ back yard.
“Dreams are like Toynberg Tiles,” she offers.
I hear PJ Harvey’s “Who Will Love Me Now” but
it’s Marilyn singing about the monster in the forest as she
fades into the woods behind my grandparents’ house.

On the train that never stops, the platforms full of
people waiting, sleeping, like a shanty town that grows,
people with no home to return to, just the possibility the
train might come, the possibility, that when it comes, it
might stop.
Michael cleans with an open flame, putting holes in
socks and carpets.
A shadow strangles me to the floor like Marilyn in
Niagara. I’m trying to call to you for help but have no voice.
Michael wakes me, says “You’re dreaming,” rubs
my chest.
I lived. I got away.

I transform into a white wolf just like the Gypsy
woman said I would. Marilyn dressed as a Gypsy, a mid
-career, post-death role where the extra lines around her eyes
and the freckled skin lends authority, a wisdom.
She says “You must retrieve an object. It is hidden
in the Wal-mart, on a shelf in Home & Gardens. You must
go on Xmas Day.”
They were open, of course, workers held prisoner to
a corporate bitch I chased and bit on the rump.
I had to do this before the tornadoes came.
My parents’ house was already leaking water—my
older sister was there, but the layout was different, recently
renovated, the exposed studs and sheet rock, the smell of
fresh pine.
In the Wal-Mart I pass the greeting cards, the
nursery, find that hidden object on a shelf of in-home magic
: rock fountains with little motors; plastic tropical leaves;
zen sandboxes with little rakes.
The hidden object? A slot machine.
It spins.
Three Eoh line up. The letter M rune.
A horse comes to my white wolf form and says
“Embrace the power of the double M. Embrace the twin
insignia.”

Madonna and I have afternoon tea and she protests
that I have left her out of my Book of M. I tell her she will
get her own book and attend her wedding. But it’s not her
wedding it’s my wedding. Madonna passes the rings around
a circle of the invited for each of us to bless. My mother
raises a glass of champagne and tells the guests she once
dreamt I married a cat.
I toast to Madonna’s Leo, my Rising sign, that she
is my M and the best Marilyn. That we three know M with
its peaks and m with its hills—twins a letter born under the
sign of Gemini like Marilyn like me on that first day of
hurricane season that shared bookend that beginning—
Madonna leans in and whispers:

I marry the letter M.

And then the anti-Marilyn arrived. 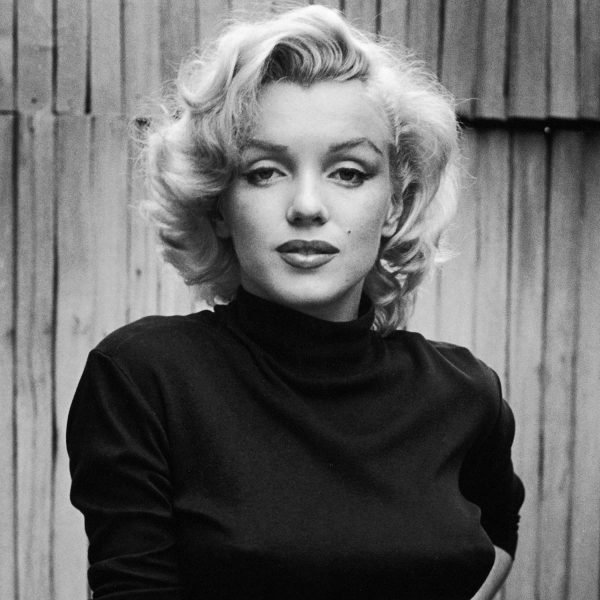