A Floor of Needles
-After Larry Levis

The songstress drunk on weather is doubled over. She refuses to sing.

They look past her, the early crowd, out the door to an alleyway
Where pink wisteria drips over power lines & rental houses.

Each has a wish on their lips, thin & papery as a peanut skin,
For a simple distance from themselves.

A conch lets the tide swell & tumble through its hollowness
After
The hermit crab has whispered off into the sea, naked for however
Long it takes to find another refuge, another pearly burden to wear.

Metaphor spoils, wishes slur & turn to salt on brandied tongues
& when everything’s boiled & strained there is only ever one story
About a man & boy walking through a forest in France,

Where trees are held in place by arms of sunlight, as if
Tricked into something they’d rather call patience
To be still while a boy carves his name into one

& a man yells not to do that, they’re living things.

The forest path stays a path no matter how many marks
The pocket knife makes, stays always littered with pine needles
That are no longer living things, like barbershop sweepings or empty houses.

The boy in this only story is never the man’s son. He might be the man,
But metaphor spoils & so he must remain a boy not signifying
This or that as he looks down at the man lying on pine needles
Whose heart has done more than murmur,

Has orated a doctrine on sea creatures & gestured wildly.

The man dies or does not. After a while the boy leaves him to resume his carving
Until every tree in one of a thousand French forests bares a crooked Alexander.

The Steinway in Lyon’s La Vermeilleur went unplayed until 1977.

Before then it was ornament, a dive bar’s weak scrawl of elegance,

An onyx shell, prone & swollen with the tinny music of spoons scraping bowls
& announcements of le plat du jour. If, before 1977, pianos could speak,
This one might have begged: just a scale, a quick

Because late summer in Lyon disoriented & every waking became déjà vu,
Because she traded decency for sanguine liquor sunsets,
Because wine was defense against the city’s alabaster expanse,

It’s not a story how she wilts with the pink wisteria every autumn
& doubles over when her warm tortures pass;

How, now, with his steady hand circling her back, she won’t even play
For the man who introduces himself as Alex, swearing he knows every
Note of that one about the knife, the one about walking away. 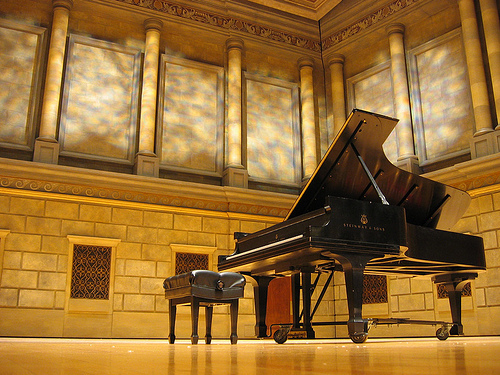