I’m with my friend Toby and we are teenagers, wearing kind-of-tattered denim, tennis shoes, and long baggy t-shirts. We are by the train tracks that run alongside this large recycling center between Latimer Expressway and Cesar Chavez Boulevard about a mile west of the old Starplex Amphitheater in Dallas. We are trying to hop a train that’s starting to move from a standstill. I’m disembodied, like a camera getting a high-angle long shot, and can see both of us begin to run as the train picks up speed. The sun is high in the sky, and the colors are vibrant, like Jack Cardiff Technicolor—as if crayons had melted over everything. We are laughing, but I can’t hear it, only the train whistle and the sound of the wheels speeding on the tracks.

Somehow we are keeping pace with it, and the city disappears and now we are running alongside a red boxcar, set against high winter wheat and yellow pastures beyond that. We make eye contact, and now I am seeing out of my teenage self’s eyes, panting a little, but right behind Toby, who takes long strides like a leopard. He has this long wallet chain he used to wear, and now it is shimmering as the sun has moved ahead of us. My vision is focused on the chain, which looks now to be about twenty feet long, spilling back toward me as I struggle to keep up. The light is flashing off the silver chain in strange strips, amorphous streaks of St. Elmo’s fire.

I guess it is just before twilight, or twilight is coming on. I can’t see as clearly as I could earlier. We decide that if we are going to get on the train we better do it now, so Toby turns and nods and we leap into the air. For I-don’t-know-how-long we just keep moving very fast through the air, I am looking down and the red dirt and blurs of green grass are moving at inconceivable speeds below. Though it seems I am moving fast, I am not making up any distance on the boxcar. Marvin Gaye’s “What’s Going On” seems to be coming down from all corners of the sky. At the lyric ‘Father, father, everybody thinks we’re wrong,’ I realize Toby has disappeared and I can’t see him now. For a moment, I can’t even see the train, only the ground moving faster and faster below me, until all is just a blur.

I pull my chin up and see the boxcar door opening with faint light seeping out from the corners, and I am able to move slowly toward it. The light surrounds me.

Then I am inside, I guess, the train car. It is silent and it is dark, except at the center of the room. An incredibly old man sits by a dim fire warming his hands. I can’t see his face, only the top of his head, forehead, eyebrows, and the bridge of his nose. Long black hair, skin the hue of Nutella and the texture of alligator skin. He’s wrapped in a faded Hopi blanket. I begin to see puffs of steam coming from where his mouth would be. (I can recall in the dream just standing there and wishing he would speak). He lifts his head and I can see his eyes for a second. He isn’t smiling. The light goes out and I am in the dark for maybe five seconds.

Light comes back again, shining brilliant and bright. It takes my eyes a few seconds to focus. I’m in the clouds, not an ethereal heaven, just suspended as if I’m in an airplane. Michael the archangel is sitting cross-legged in front of me in mid-air. He opens his mouth, and I hear Gather up the hollow earth disinherited as I wake in the dark, at 3 am, shivering. 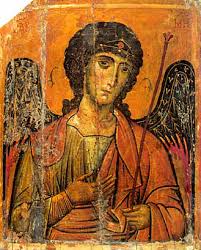