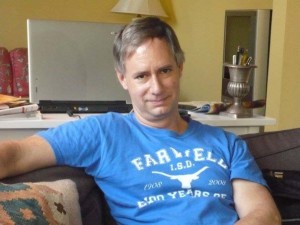 Philip Clark and David Groff have just joined forces and edited an anthology of poems by poets lost to AIDS. The collection is entitled Persistent Voices and has been published by Alyson Books. Some of the forty artists featured are Tory Dent, Melvin Dixon, Tim Dlugos, Jaime Gil de Biedma, Essex Hemphill, Leland Hickman, David Matias, Paul Schmidt, Karl Tierney, and Assotto Saint. The span of voices is smart and exhilarating.

Eight years ago Groff’s own first book of poetry received one of the National Poetry Series awards (selected by Mark Doty) and was published by University of Illinois Press. Groff’s Theory of Devolution appeared at a time when poetry was finding its expressive way beyond being elegiac or politically shrill. The finding was of something that resisted erasure. It was equally of something that would access vitality. Groff’s collection hit the right note, and for those who might not have picked it up I offer a few observations.

From Fire Island and the tide waters of Baltimore to facing east into the Pacific near Big Sur, the ocean certainly makes ebbing and flowing look easy: easy come, easy go. David Groff’s Theory of Devolution is a collection of meditations that run the poetic scale from molecules of sweat to exploding stars. The poet is searching for an original elementalism beyond guises and formulaic schemas of fact: vegetable, bestial; races, nationalisms, clothes; the living and the lost. Each individual seems rapt in a borrowed body: a calf’s placenta, a discarded umbilical cord, delicate bodied crabs, a kicked open pumpkin, a miscarried brother, the unharvested eggs of a lesbian friend with cancer, fish. And how can one who seems oneself to be a tenant be “possessed” by another?

What a grandiose and fearful puss I am.
The dead belong to the living blah blah blah.
It’s the kind of ownership an adolescent
possesses over Bobby Sherman in the dark.

In human gambles and adventures, none seems higher risk than that of human affection. For Groff, such attempt at coupling is the “jet propelled elastic band of Wile E. Coyote.” Human beings collide and are locked together as mysteriously as oceans. But it is not how particles of an element mysteriously lock together that is at the center of Groff’s attention in this collection.

This is a mediation on later…when an element is unlocked and set adrift. Either, cut off—as in cut off and adrift beyond escape, or as a reveler cut off full of grief and adrift with inescape.

His body’s as gone as bodies can be,
steel-casketed in some Ohio cemetery
I will never make a point to visit,
though I like the way graveyards level you,
let you feel a part of something bigger,
like gay volleyball.

Drifting is everywhere. There is smoke, carcasses of horses in a flooded river, a dream of drowning, a floppy penis beneath a hospital gown, a glide that turns to bobbing, falling, the religious calling of a father, and the romantic reverie and grief of a someone who finds it strange to be calling himself a man: 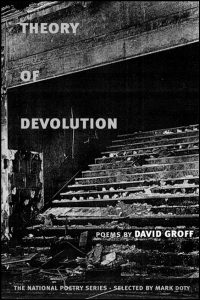 …all we can do is
Admit how small we are in scale, admire
The coast and maybe wade past it,
Or sit in the rocky sand and finally
Lean back and fall asleep in an outsized landscape
Under a close sun. Maybe life in fact if not in deed
Lasts longer here, thanks to the beauty
That may in fact rub off on us, making the dull
Progress of the body primary, the sun
A name for a kind of contentment…

There is real human terror and inspection of the beloved as carrion. One poem is about what function to find for a death mask stored face-down on the speaker’s nightstand. Also in these poems are brave passes of the angst of reaching for the lost element. And there is sadness:

No holiday wonder I awake with the edge of sadness that—silly me—
I think is mine alone, my private port wine stain.

But Groff is neither provincial nor maudlin. A poem about laundry—the small demand routinely met–is one of the strongest in the book. His universal mind is also one that gives voice to wit and comfort:

…you hear the subway’s regular purr
and bluejays who aren’t tiny Isaiahs screaming
but just the usual Brooklyn cantata,
the kind of music you could hum to a friend.
There, now. Are you better now?