Every once in awhile you are where the spirit world chooses to spend their night, and you find yourself among the great celebrity ghosts of Woodie Guthrie and Lady Macbeth at a Tom Waits concert at the Palace Theater, 2006, or a Leonard Cohen show at the Ryman, 2010, or a reading in celebration of International Women’s Day, March 5, 2011, sponsored by Her Circle Ezine. I happened to be one of the readers, but that is not what buzzed the night with presence. I partook of it and contributed, like everyone else. 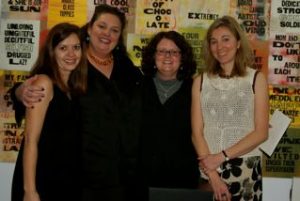 There were approximately forty two people gathered in a gallery in a downtown so small you could stride from one end to the other as quick as a tequila sun rises on a bar. I name the headliners because the stage gathers the crowd, but the audience defines its character by its receptivity and readiness to unite. There is only power in numbers when the numbers collapse, as Wallace Stevens says of a play in which “an invisible audience listens…to itself expressed / In an emotion…as of two Emotions becoming one.”

It was a topographical night: sorrow, laughter and scholarship were crossed like broken plains. Shana Thornton opened with a short excerpt from her untitled novel about a woman keeping her thoughts defended and intact against the potential dismantling of her deployed husband.

Mitzi Cross , a playwright, shared the first chapter, entitled “The Drowning,” of her autobiography. “Harrowing” is a gorgeous word to describe so brutal an act as a father plunging his five-year-old daughter’s head into a toilet to scrub at his own indissoluble rage. Does it matter why? “I don’t know why they bite,” a Holiness snakehandler says after being bitten by a rattler. They bite because they bite. We can blame the handler for handling it, but not a five-year-old for being born into a household that tries repeatedly to drown her, not metaphorically.

The writher in Cross’ handling shrinks as she grows large enough to wrap around and around and around him. Forgiveness is a common word for an infrequent action—a contrary one born as if of inaction so subtle is the moment when it arrives. After years of attending to it, dreaming it, reliving it in frustration and disappointment with all the yearnings of a girl for her father to love her against all the fury of a woman spurned, Cross looks one afternoon at him as an adult, mowing the lawn, and sees him as he is, surprisingly pitiable.

Our indrawn breath held, hearts wide in our chests during Cross’ reading, we exhaled mightily with laughter when Kim Leavitt took the podium and drew us into Slop Hollow, West Virginia, where her teenage father stirred up the Methodist populace with the grape juice and White Lightning concoction he affectionately terms a Purple Jesus. We laughed to imagine Leavitt’s mother, among the audience members, swaggering as a girl with silver pistols at her hips, the proposal of marriage still just a prediction on a Ouija board, arguing with her designation of the cardboard tomahawk that came with her ongoing playing of the Indian role against the boys’ undefeated point that “How else can the West be won without the Indians?”

If There Are No New Ways To Kill A Man, as the title of my first chapbook claims, there may be new reasons. I read a poem from this series in which I argue with T.S. Eliot’s request of the soul to “be still, and wait without hope…” before turning to Emily Dickinson’s, “Joy to have merited the pain.” My current project is to write prose translations of poems by women I inadequately understand and in so doing, ask myself questions long unasked. I also read a translation of E.D.’s “The Missing All,” for which the speaker is grateful, since missing the All prevented her “From missing minor Things.” Her attention thus goes to the wonder that bows her head over her desk in creation—as ours were raised for an evening, listening to these four voices in a gallery surrounded by block letters in the collaborative handmade book projects and posters of Cynthia Marsh through which quotations beckoned like doors as if “a World’s / Departure from a Hinge” is just a matter of opening.