Birds of Hoboken, Orchises, 1995
Not Till We Are Lost, Louisiana State University Press, 2004 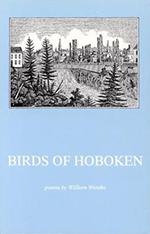 Birds of Hoboken was published in 1995. Not Till We Are Lost, William Wenthe’s second collection, was published in 2004. The two books, end to end, read as a testament to craft and seasoned poetic vision.

Both books use birds as vehicles. Poetic flight has long fired somber divinations and lyric contemplations. In Birds of Hoboken the vehicles give way to soliloquies concerned with time and cause and effect on a human scale. Landscapes are expressions of human abandonment, passage, or remoteness. The artfully measured lines of these poems move from ornithological and fishing observations, (in New Jersey, Virginia, and New York City) to Dante and more philosophical questions of love and god… from observations of the “remoteness we haven’t killed yet” to a choir of “ungainly voices positing an idea of harmony, in need of something large enough to embrace us all, imagined out of our stunted love.”

The notion of a balance between hope and time hovers near to the center of each poem. Oddly, in one poem about composing a wedding invitation, the moment is laced with a “spell of doom”:

Leafing through Shakespeare, we look for
phrases about love that have stayed.
Even so, the spell of doom
mutters behind the old comedies, the sentence of death
for young ones who would couple
with their own desire: So quick bright things
come to confusion. In the stories, such knowledge
gets pressed back by love, the faith
that faith itself will play the dramaturge,
making all, in the end, even.

(”Invitation to a Wedding”) 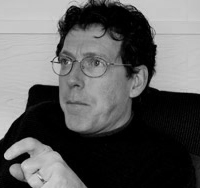 Wenthe is aware that along with philosophical and romantic bonding comes risk: there is no intellectual enterprise, no romantic journey, no physical ordeal without some possible encroachment of danger. Wenthe may be hopeful, but he is also an observer of the pattern of the physical world. One may faithfully pledge one day; but, another time, one may hopelessly surrender. One gate may be labeled RECOVERY, another DOOM.

{Dante] finally had to turn
to the earth to explain it: to a rose
that gives shape to Paradise,
to a river made of light;
and a hive of bees tumbling among blossoms––
angels ministering to souls.

But if we can translate in the other
direction, who, then are these leaves
riding the wind outside my house?
… Does this river, then,
run through heaven? Is it possible to save
these leaves from a doom of merely spinning?

… And what is the name of this gesture
the asters make in the wind?

…the gestures of the asters
inviting us into fictions––extended names
moving like angels or like bees.
(“Fictions”)

In Not Till We Are Lost Wenthe is subject to some dislocation. He departs from his familiarly labeled geographic landscapes and moves into the more austere terrain of West Texas. Lubbock, neither lush nor florid, has its own beauties. In the new landscape, there are new names he must learn for birds, flowers, and fish; and there are still the poet’s private reveries drawn from art inspired by picturesque landscapes and death daubed Audubon illustrations.

The voice of both of these collections, line by line, is quiet and observant–– elegant in every way. But the poems of Not Till We Are Lost are more clearly poems of aftermath. Self knowledge has been honed by several personal tragedies. The poet’s experiences are not simply romantic transforming energies, they are real events with physical consequences. No one escapes suffering. But the poet’s emotional precisions have been tempered:

Strong and simple,
universal yet bitingly
personal: why not
worship pain? Like spirit,

it goes beyond the limits
of body….
Maybe the Christian
punks I’ve lately noticed
around town know more
than I do: their skin needled

In one particularly beautiful poem in the collection, “Bluebird and Comet,” the poet departs from the self-deluding, self-destructive March hormones of a blue bird and cosmic mechanics to a meditation on the decline of his parents:

… barely a body between them
whole enough to keep a house, and still
they persist, keeping to their rounds
of chores, habitual as birds. . .

Lyrically, in the close of the poem, the poet both surrenders and launches out:

I’m drawn back to that maddening
blue flare, the brilliant
surrender giving way to song.

The book ends in an arresting crown of unrhymed sonnets. They, too, are about source, time, and writing:

When I arrive at the end of a line,
another kind of mystery emerges––
the rhythmic tug, the overlapping urges
of verse traversing back and forth in time:
the way syllabic repetitions rhyme
what’s gone with what is now, and prophesy
a future seeded in the present. A sorcery
of sorts, for time moves through the poem
as the poem moves through time.

William Wenthe is a professor at Texas Tech. His poems have been published in The Paris Review, The Southern Review, Ascent, TriQuarterly, Poetry, and American Literary Review, among many others.