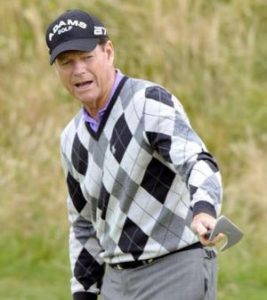 Today a 59-year-old golf legend had a 7 and a half-foot putt to win the Open Championship, (formally know as the British Open) perhaps professional golf’s most prestigious event. Watching Tom Watson outplay the best golfers in the world this week was one of the most invigorating things I have seen in a long while. For four rounds of golf he was the essence of decorum, a testament to resilience, and the same magnificent player he was 25 years ago. The shots of him standing stoic on the cliffs of Scotland waiting to tee-off, were some of the most compelling images I’ve ever seen in the sporting world. The possibility of what could have been today, what was 7 and a half feet away, is mind-blowing. I felt like a child, nervous and bursting with excitement.. One par=four strokes on the last hole of play. That’s all he needed to do to become iconic.

And he didn’t. He missed his par putt, played the hole in five strokes and lost to a 36 year old in a playoff.

Some dismiss sports as something narrow or trivial, they could not be more wrong. The elation I felt today watching an old man walk on emerald carpets while scowling in the face of age and expectation, was perhaps the purest and most cerebral feeling I have ever had. I raise my glass to Tom Watson for reminding me that anything, absolutely fucking anything, is possible. I believe that again.