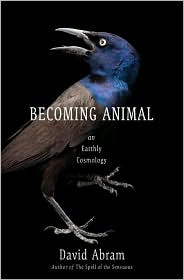 11. David Abram’s Becoming Animal:An Earthly Cosmology. Pg. 37 of 313. I bought this one for the cover. Not always a good start, but I’ve had luck with this before.  The interesting thing is that what I did read of this book had a profound effect on my worldview, and this, I think, was the root of its inevitable undoing.  Once I grasped the thesis, which was an affirmation of my own stirring discontent with metaphysics, I chose the safe route, which usually involves a retreat of some kind.  In this case, I didn’t want to risk being disillusioned by writing that couldn’t stand up to the power of the ideas, which seem simple now in retrospect: Abram basically argues that our human obsession with realities that are beyond our senses is misguided, an evolutionary glitch, so to speak, that keeps us from the deeper realities which can be accessed by sensual means.  The book reminded me, in some ways, of Stanley Burnshaw’s timeless classic The seamless Web, a better book I should read again instead.

12.  John Stubbs’s John Donne:  The Reformed Soul.  Pg. 262 of 478.  OK, first of all, I have to admit to some envy on this one.  Stubbs wrote the book at age twenty-seven, a graduate of Oxford and Cambridge.  My biased, summarily bitter and jaded conclusion:  the precocious, good-heartted bloke was too young to grasp the suffering in Donne’s Holy sonnets and had very little to actually say about HOW Donne’s soul was reformed, a word which suggests an initial dissolution, the likes of which I kept waiting to be revealed in what was otherwise a competent and astute biography.

13. Skip Borack’s The Eden Hunter.  Pg. 138 of 317.  I was expecting a lot from this novel, more, obviously, than Horack could deliver.  Kau, a pygmy tribesman recently sold into slavery, escapes a Georgia plantation into the sparsely yet diversely populated wilds of Florida.  The problem?  Once again, the language–with such a classic narrative structure one expects the language to vibrate with deep mythic reverberations.  More than that, we should expect moments where the landscape breaks the very back of language and leaves us swamped and tangled in their mutual fecundity.

14.  Matt Taibbi’s Griftopia.  Pg. 81 of 250.  A necessary rant as corrective to the tepid public response to the unregulated power and recklessness of Wall Street.  Anyone with even a vague respect for Ayn Rand needs to at least read the second chapter, if nothing else.  My gripe:  name calling.  Probably a carry-over from childhood, when I was the recipient of a barrage of malicious monikers meant to bring me to tears (and they worked).  Taibbi is rightfully angry, but, frankly (and I’m sure this sounds prudish), I can’t accept name calling, especially when animals are demeaned to describe human behavior (he refers to Alan Greenspan, for instance, as “gerbilish”).  Animals deserve better than this.  The greedy of this world aren’t any more like animals; in fact, they’re less, in that they lack basic creaturely desire for warmth.  They’d rather be cold and rich.

15.  Jeffrey Lent’s A Peculiar Grace.  Pg.91 of 395.  After the Fall is simply brilliant; in fact, I can think of very few better first novels.  Lost Nation is a compelling McCarthian twist on border narratives, drawing us to the neglected region of our northeastern border as opposed to the oft-explored southwestern. Lent was once among writers who’s new books I simply had to buy on their release date.   Also on that list would have been Cormac McCarthy (obviously), William Gay, Bruce Olds, Franz Wright, James Tate and David Malouf (no women, I am well aware, but I’m open to suggestions).  Since then both Lent and Olds (for The Lost Moments) have lost me as a fan.  Granted, both writers still write better sentences than what is to be found in almost every book I pick up off the fiction shelf, but it’s as if they both fell under the spell of editors that told them something akin to “stop putting so much fucking pressure on the language and just write your damn story.”  I can hear it now:  “Read some Richard Russo or Jonathan Franzen; it’s about the stories.  That’s what readers want–a good story.  The language should be transparent; you don’t want it to get in the way.”  Or some such nonsense.