There’s no idea of order here
unless we can claim that
an utter lack of plan is,
in fact, itself a plan.
Things were planted as
they came, no thought
to size or sprawl, no sense
of what a small tree
can become. Thus, the branches
of the tall, wide birch
reach everywhere for sun,
and the peonies, long rooted
in one spot, starve for
lack of light. Each year,
they’re more diminished.
It’s troublesome, having
no vision, afraid of killing
any little thing so
everything lives and reverts
to a feral state.
Darwinism in the flower beds,
chaos in the trees.
What is order in nature?
If the meek, at last,
will inherit the earth,
there’s no use in fighting.
The lilies under the sumac
are dwarfed, though their
stunted blooms shine
just as bright. The shy ferns
grow tall, even in sunlight,
popping up, it seems, overnight.
Where is the order in anything?
Or was it only ever
an idea, your dream of
a little Utopia? I know
you’ll understand this.
It’s not what I had planned. 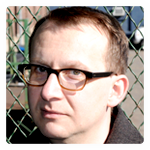 William Reichard is the author of four collections of poetry, including Sin Eater (2010) and This Brightness (2007) from Mid-List Press. He lives and works in Saint Paul, MN.