My friend Moe is “Old-School” Brooklyn, born and raised and having spent his plus 70 years in the Borough of Kings. About once or twice a year he and I go golfing at a course in Southern Brooklyn, about three long drives and a chip shot from Jamaica Bay. When I play with Moe, I always come away with some unexpected wisdom, which, like my putts , takes a while to find the mark. On our most recent trip, I was playing poorly, not uncommon, but the level of bad shots squeaking off my clubs was exceptional. After another dribbling drive, I banged my wood hard to the ground, shouting out choice words with more force than the swing I had just taken. Moe immediately interceded.

“John, John,” he said, his voice as calm and smooth as his follow through, “why are you getting so mad?”

“Barely past the tee.”

“So what, now you’re closer. That’s how I look at my shots,” he continued, “short, long, middle, whatever…as long as I’m getting closer to the pin, I’m satisfied.” 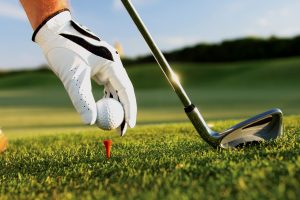 It took another few holes of hacks and slices and hooks until what he said to me found the cup: expectation was the source of my trouble, not my swing, not my wobbly hips, not my sloppy wrist turns, not even the choice of my club, but the choice I made before each swing. Basically, before I even took a shot, I had determined the best outcome. I had already set in my mind where I wanted the ball to end up. And when it didn’t, when it rolled five yards instead of 300, I reacted with anger, dejection, and frustration.

But once I adopted Moe’s “just get it closer” mantra, things changed for the better. Now, when I stepped up to the tee, my only intention was to move the ball forward, and since I was almost certain to do so (I admit to hitting a few balls in my life that ended up behind me after colliding with trees, and, even once, a golf cart), I no longer felt rage at an unmet expectation. If anything, I felt pleased by my output, and, with this change of attitude, my game improved. By changing my expectations, by releasing the pressure to achieve a pre-specified goal, I was able, conversely, to reach that goal.

It was a powerful lesson Moe gave me that day, and while it was intended to help my golf game, I have integrated the mantra – “just get it closer” – into my writing practice as well, changing the expectations I set whenever I place my hands on a keyboard. Instead, for example, of “I must finish my story today,” I tell myself, “I want to get closer to finishing my story today, whether that means writing one word, one-thousand words, or just learning why I wrote one word as opposed to 1,000 words.” I have found that by doing this, that when I am done writing, I am less stressed, more content, and much more positive about what I accomplished. And just like that day on the golf course with Moe, my writing output, and my enjoyment from the experience, has increased.

I am also using Moe’s mantra when it comes to marketing my work, changing expectations from, say, “My new story must be placed in a top journal,” to, “I will send the story out for consideration, and whatever happens will bring me closer to the goal of publication.”

Moving forward, I know I will deviate from the mantra now and again, that I will erupt in anger some day after hitting a wayward drive, or curse the literary heavens after receiving another rejection letter from a publishing house. But just knowing this, accepting that I am not perfect, expecting imperfection, helps me get closer to the ultimate goal of, well, getting closer.

John McCaffrey‘s short stories have been published in more than 30 journals. He is a playwright, a creative writing teacher, and the author of the novel, The Book of Ash (Boxfire Press). What Sports Taught Me About Writing is a new series he is developing.
Loading Comments...