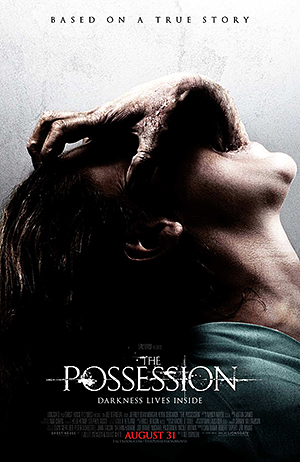 I took my dad to see Prometheus this Father’s Day, and of course when you see one summer movie, you get to hear about the rest. The only preview I actually remember is for a film called The Possession. (At first I thought it was a lazy title, but so is Paranormal Activity. And The Exorcist. And The Shining.) The plot seems familiar: girl meets suspiciously sealed box, girl pries it open, girl meets demon, and terror ensues. The standout elements appear to be Jeffrey Dean Morgan playing a demon-fighting father (again) and the fact that the exorcist is a rabbi, a change of pace from the usual priest.

But no matter how formulaic, unscary, or laughably bad The Possession ends up, I will undoubtedly see it. They’re not fine films, and they’re not the sort of thing that people usually discuss in an arts review, but I’m a sucker for horror movies, even the bad ones. And my favorite subgenre is the demon or possession storyline, although the haunted house plot ranks a close second; within that, my favorite sub-subgenre is the tale based on a “true story,” as this one claims it is.

My motive for this preference isn’t aesthetic, or even anything refined: it all comes to crass self-preservation. I view horror movies—and I suppose this could be said of any fiction—as elaborate “what if?” games, as in “What if there were a ghost in your house?” Horror movies just dramatize different scenarios and their likely outcomes, and it’s the viewer’s job to plan accordingly. Take, for instance, the b-list monster movie, the one with a pterodactyl that shoots lasers out of its eyes or something like that; I’ve accepted that, should humanity be confronted with such a threat, my only strategy would be to curse God and die. I’m a coward and a turncoat, and would run screaming without hesitation. I’m not a scientist, so I wouldn’t be able to identify the creature’s weak spot or engineer a weapon to kill it; I’ve never shot a gun, which means I also couldn’t fire that weapon into said weak point. The same will hold true should the zombie apocalypse happen: when brains start getting eaten, people like me (unathletic, afraid of blood) aren’t going to last more than a day. The only role I can play is to get killed so the survivors have someone to avenge.

Because my fate is sealed, I don’t get scared when I watch things like Supergator or The Night of the Living Dead, which is to say that I don’t enjoy them in the way that scary movies are intended. What I like about plots involving ghosts and demons is that they scare me to an irrational degree. Case in point, I once read a post on a comment thread about a girl who was buried alive while her killer chanted some nonsense and by reading this post the girl’s spirit would suffocate me that night; it’s classic chain letter nonsense, I know, but I still couldn’t sleep that night. It scared me because I can’t just let some ghost choke me out because I figure with a spectral horror—spirits, demons, poltergeists, etc.—I have a half a chance. What’s inevitable isn’t really scary; fear comes from possibility, from knowing that you could fail. Responsibility is scary. Consequences are terrifying.

That’s why I watch anything that involves a demon or ghost, because in that situation I’ll be expected to do something. You can’t fight something without a body, so my lack of strength isn’t an excuse, and there’s no point in running from something that can go through walls, so cowardice won’t excuse me either. Stories about ghosts and demon possession have existed far before film, and so have methods of dealing with them, which means that there really is no excuse for letting one terrorize your house. The problem with the characters in horror movies is that they haven’t seen enough horror movies: when you watch as many as I do, you develop a thorough plan of what to do when confronted with a demon.

The golden rule is that it’s never “just” something. A door opening by itself is never just the wind, and a bump in the night is never just the house creaking. The occult is strictly a DIY business: burning sage is a waste of time, but a few Google searches will tell you what you need to whip up a banishing ritual. If your own efforts fail, it may be time to call in some help, but never use a psychic, as they are usually incompetent or in league with evil. A religious authority is the safer bet; a Catholic priest is the traditional choice in most horror movies, but feel free to shop around according to your beliefs and what your area has to offer. The thing to keep in mind is that you’re going to want to fight fire with fire, and when the fire against you is the fire of hell, it means you’re going to want an angel to the rescue. (An archangel would be preferable, but I bet they stay pretty busy.) I think if you call out to them for help, they’re legally obligated to do something, sort of like 911. But before you do that, take a moment to brush up on angelic history: if you’re going to turn the Host of Heaven into your personal ghostbusting squad, it’s only polite you know a thing or two about them.

At this point, I’d like to thank those of you still reading, as I do realize I sound like a crazy person. After all, only a crazy person uses phrases like “whip up a banishing ritual” when not talking about a video game. In my defense, I don’t believe a word of any of this. I don’t really believe in ghosts, demons, Heaven, Hell, God, or the devil. But what I do believe is that you can never be so sure of anything as not to have a Plan B, and given the dangers of ghost or demon presence, I believe that plan should be as detailed as possible. I may not be able to outrun a zombie or fight a genetically mutated giant anaconda, but I can make a phone call to a priest.

But can I? Would a priest listen to someone raised Unitarian? Do angels care about people who can’t go an hour without swearing? Probably not, which is why, if I were ever face to face with anything paranormal, I would set the world record for speediest conversion. I don’t believe because I haven’t been convinced, and a demon trying to eat my face would be more than enough evidence. This is the core of why I love this genre so much, and why it’s so persistent: in a way, it would be great to be haunted or possessed (although if any specter or monster is reading this, please don’t take me up on the offer). The world is governed by uncertainty, where science, faith, political and philosophical dogmas all vie for the exclusive right to interpretation and answer-making. But if you are face to face with a ghost or a demon and you witness Michael the archangel booting it back to the lake of fire, you have officially run out of excuses. You can’t rationalize it, or cry fraud, or explain it away; you have to come to terms with the fact that you have witnessed hard evidence for life after death, salvation and damnation, the greatest discovery in history. Inevitability might not be scary; truth might not be scary, but that moment before, when everything you were sure of, vanishes, is the most terrifying moment I can imagine.