“I’ve never met a man who liked the Victorian period so much.”

The woman who said this is the head of a local nonprofit, and I’d given her design advice on her website. She invited me to chat after we were done and, since she was a writer herself, she asked me who some of my favorite writers are; my response of Edith Wharton and Henry James prompted her response (even though Victorian might not be the best description for them, especially in Wharton’s case). 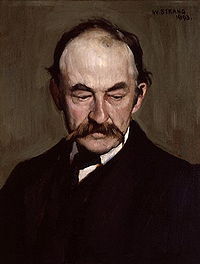 I could have listed others if we’d had the time, said that I also like Theodore Dreiser, Joseph Conrad, and Thomas Hardy, which would have gotten the same reaction.

It’s not a new reaction. Most of my writer friends have a different canon: they’re all in love with Dave Eggers and they talk about David Foster Wallace the way fourteen year olds talk about new boyfriends. Most of the other writers I know went to the same school I did, took the same classes or had the same professors, and sometimes even have similar styles as me. So why don’t we have the same sources of inspiration? How did my reading tastes end up stuck in 1920 (or earlier) when everyone I know barely likes to travel beyond the nineties?

Because my friends are only a reflection of a bigger trend I’ve noticed, a trend in writers neglecting older writers in favor of newer ones, even and especially hyper-new ones. I once told a professor the reading list for a nonfiction lit course—the earliest work (and the only one not published in the twentieth century) was Walden, published in 1854, while the most recent was John Updike’s 1989 memoir, Self-Consciousness—and she complained that the list wasn’t current enough. Never mind that it included classics of nonfiction, it was too old. I might list other examples of every writer around me ignoring venerable chunks of literary history, but that still wouldn’t answer the why of the situation; what is causing this obsession with the new?

In a broad stroke, it’s because of a shift in our standards for good writing, in what we see as the purpose of literature; it’s my theory that we’ve come to value technique over meaning. When my writer friends praise one of their current obsessions, what they talk about are technical issues. They like Eggers for his wild experimentation, Wallace for his footnotes, or Franzen for his use of POV. What these authors have to say gets lost, and their works are reduced to technical training manuals.

Contrast that to one of my favorite Victorian writers, Thomas Hardy. In terms of technique, he could have used some help. Despite being one of my favorite novels, Tess of the D’Urbervilles is a tad too long and rambling, in need of a tighter plot structure. It relies heavily on coincidence, and the final passage is heavy handed and dramatic. Jude the Obscure faces many of the same problems; in the first chapter, for instance, the narration jumps forward about a decade with just a paragraph. But despite all these flaws, Hardy’s work elicits a raw emotional response unlike many others, and he has a vision—a bleak philosophy at once naturalistic and spiritual—that infuses every element and gives the novels power beyond technique. Hardy is a writer with something to say, and that comes through even if he doesn’t always know how to say it.

This is the root of the problem as I see it: we once turned to literature for its insight and revelation, but now we see it only as a technical object, a place for play and experimentation. We don’t care what writers have to say, or if they have something at all, so long as the writing is polished and the plot well-structured. I realize this still doesn’t fully answer the question of why, since it doesn’t address how this situation arose, but it’s a big topic and one blog post isn’t enough to cover it. The next segment in the series (apparently, all of my posts from now on are going to be part of one series or another) will have my take on the history that led to the triumph of technique.