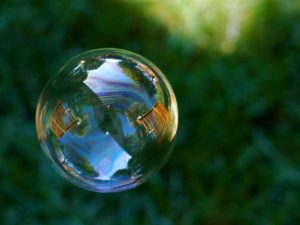 Sometimes a writer comes to a crossroads that causes her to pose a question she never really asked before. Until that moment the answer was assumed, implied in the act of writing. Thus, the asking must indicate an interruption, however brief. Pause gives space to deem it—a thought bubble tossing on an opalescent sea.

Writing is an act and a meditation—the friction that not only the product of writing differs, but both means and agent, the furniture on the carpet of its agenda.

When does one stop loving? One tries to stop often, when hurt, or anyway defensive enough to confront the drag of headwind. Kay Ryan was riding her bicycle across the states, she said anecdotally at a reading, when her thoughts became single-pointed and she could think infinitely far in any direction. It was a happy accident and she used it to raise her concern about the discouragement of rejected poems, lack of support financial and aesthetic. Of course we in the audience knew the happy ending of the narrative, as she had already been elected poet laureate and greeted us as the headlining speaker at a major conference, so we could feel righteous or hopeful or indignant about similar passover notes and frustrated longings. Of course, not everyone hungers for attention or validation, though many pretend against their need. But they have a function.

Ryan posed the same question asked by George Orwell, Joan Didion, and Paul Auster to name a few essays that variously illustrate the circumstances that give pause in writing. The reply Ryan received, big as God or anything markedly outside you, was “Do you enjoy it?” She knew it wasn’t her voice that answered, which is why I write—to feel safe, focus on the task at hand because I’m sure it’s the right one. The “right” one. There is a wryly ironic voice underneath this voice, and a tiny shivering schoolgirl underneath a schoolbus full of vague and contradictory pronouncements. A flock of dust in which a single mote glistens.

I used to be an excellent listener. Now I am not sure. I am only sure, as a student’s Uncle Milt said in a Composition essay, after eighty years that the shower curtain goes inside the tub, and that he and a billion like him are thrumming inside the world that is me.

It is a relief when the dicta are physical or traceable, as they can be caught in their limitations, wrong. They are always wrong, because past, but there is a small and temporary thrill in correcting knowledge. Ha! Father/teacher/author did not know. I am corrected now. More so than them. Where is my licorice whip of happy thought?

I write to find myself out. To watch my re-conditioning process , the scurry to keep this and discard that. But you either live it out like Peter Pan or lock it down. Every moment cannot be a choice, a practiced habit, but quite the opposite, a willing confrontation. (My bias against the unknown.) What if I trusted it? Peter cried a lot, came around hunting for a mother, lost his shadow, got thin eating for pretend, needed a window to be open all the time. Innocence is only bliss when innocent of itself.