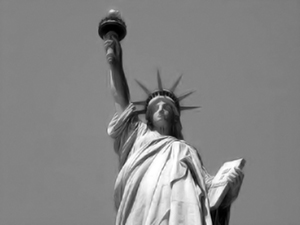 When I left New York City, just about five years ago, I believed I was doing the right thing for my art. Over and over I insisted that it is better to be a full-time artist in the middle of nowhere than a part-time artist in the center of the universe. This theory has panned out to the extent that I have been more productive since moving back to Muskegon, Michigan than in all the previous years of my work combined. Unfortunately, that productivity has been something a like the effect of a paint-ball shotgun in the dark – spraying its mark in all directions without going very far in any of them, or even being seen. Still, none of this work would exist if I stayed in place where I would only have had time to talk about music and writing. Still, I had time to write and that was invaluable in a place that seemed to inspire me to do so. I didn’t necessarily want to write about the City per say, but the City lit me up with its trite but real energy. It made me want to create any and everything. The cold fact is that a lifestyle that allows creativity in New York is one of extreme poverty or extreme wealth. Either the choice is made to survive on jobs that demand and pay little, but leave one with enough time and energy to create; or one is born into such extravagant wealth that, even in a place as expensive as New York, it is possible to spend a great deal of time on one medium or another. To a considerable extent I lived the former lifestyle for two years. My home of homes became the city that never eats. I stayed slim out of starvation. As beautiful as the idea of being a bohemian scraping the bottom of dumpsters for nutrients is, I tired of living on charity. The way I managed my money was to leave the apartment with no more than twenty-dollars cash, and when that was gone, I spent no more. Because it was always gone by the afternoon, I often found friends offering to buy me meals to have me around when I couldn’t otherwise afford to be. Eventually I came to depend on the kindness of friends, but that wears on the sense of self-worth, one having to mooch and bum the better part of life to get any at all. There is misconception of tourists that there is always something to do in New York. The truth is that there is always something to buy in New York. When one can afford none of it, and is constantly surrounded by those who can afford it, a particular kind of despair settles in. Everywhere I looked were the super-wealthy and their trust-funded offspring, and I forever fell short when I tried to roll with either class. So emotion above all was what drove me from my love, sadness and fear and pain, having strained to the point of hurting and worrying that the hurt would only worsen. Still I dream about it more often than any ex. I am in a subway tunnel going home. I am on the rooftop of my building. I am on a smoke break from my job. None of these instances remain. So it was a sense of mourning that my life moves on. I feel as though I have inherited a great deal from someone now dead to me, and am mixed in those emotions as if I were a melting pot of my own.