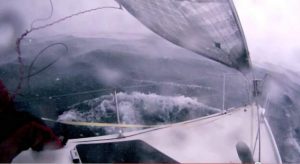 At the end of an ill-fated sailing trip, about six hours into a raging storm that would last eleven in the end, I gave up. The GPS, Auto-pilot, bilge pump, and engine all went out while rolling around the rocks in northern Lake Michigan, with beacons all around us tinkling like stars around a space suit adrift into eternity. I was dead already, so I went into my cabin, took off my rain gear and the clothes soaked beneath it, put on headphones and listened to a song about God. I didn’t pray, I didn’t even believe, but that someone else did and had been inspired by that belief comforted me. Rocking in the bow as it slammed into ten foot swells, I fell asleep in my cradle.

Just before I fell, a thought possessed me. I thought about the plan I had to move back to New York City some day. Some day always seemed to be one of plenty days to come. In the wake of a violent voyage, I saw my life floating away, cut into blank white and boredom by the path of the ships around me. I promised myself then that if I made it I would move back to New York as soon as possible. So, after eleven hours in cauldron, when a research vessel answered a distress call and waited for the coast guard to tug us in, I knew as firmly the ground to be beneath me that I would follow that ground to where I belonged.

With a thousand dollars, a part time job walking dogs, and a couch lined up, I went east, a not-so young man looking not for a dream but for a reality, a steady life Michigan could not promise me. I came to New York not looking to be a star, the greatest writer, or even the greatest writer I could be. I came to New York to get steady work and a decent place to live. Now, ten months later, I have achieved that. I am working full time doing something that cannot be done in my home town of Muskegon and living somewhere that could not be around in my home town either.

Only one problem remains – in this content and comfortable life I am not creating. I have barely written a word since I found a full life, and I feel myself slipping into an epilogue never written. After the happy ending the story ends. So I have resolved to break my weary silence of blankness and fill pages once more. I find myself blocked by blessings, and terrified at how little the neglect of the creative scares me. I feel strangely like that man in beauty and fury, listening to his headphones in a squall and pretending art could do little more than console him in his resignation. If I just hold on, I might be that man who awoke three hours later and helmed the ship for a captain with hypothermia, one who found courage to scream at the storm while slammed by the waves, throwing a voice almost impossible to hear but there, and urgent, and powering through the noise of the city or the sea. Muse, listen. I have yet to drown.